What do you get when you mix prison inmates with shelter animals and their caring handlers on a warm summer evening? Pure joy, as reported by Willamette Humane Society staff and volunteers who attended the Oregon State Correctional Institution (OSCI) Annual Dog Days of Summer event on August 29, 2016.
The event was a celebration held in honor of Doc, a 5-year-old Border Collie adopted from WHS four years ago. “Doc’s club is very well supported here,” said Captain Tammy Norton, “He gives back so much to all the inmates. He even made enough money that he gave them each a gift at Christmas time!”

Captain Norton serves as Doc’s advocate and training supervisor. She says that fund-raising efforts for Doc among the inmates provided for all the expenses of the Dog Days. The event included a barbecue dinner, ice cream filled waffle cones, gift bags for the shelter dogs and $1,000 donation for both shelters in attendance. The OSCI inmates also made fleece beds to donate to the dogs.
Joining WHS at this event was Safe Haven Humane Society from Albany, Oregon. Four Safe Haven staff members brought four dogs, one of which was available for adoption. Representing Willamette Humane was Operations Director Betsy Bode, Volunteer Manager Janine Catalino and Behavior Program Manager Catherine Comden. Additionally, WHS volunteers turned out in force for this evening of caring and sharing. Seventeen dedicated volunteers – a dozen dog handlers and five kitten chaperones – supported six adoptable dogs, four shelter alumni dogs and nine adoptable kittens. One of those kittens was adopted by an OSCI staff member, who fell in love on the spot. 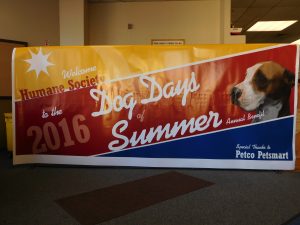 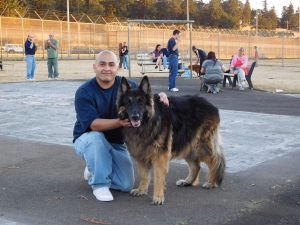 Approximately 106 attending OSCI inmates and their 45 guests handled the dogs. Everyone socialized in a large outdoor courtyard with picnic tables, swings, and large metal animal sculptures. Dog handlers kept the dogs focused on their task to visit with the people and encouraged inmates to take the dogs for a stroll. The kittens stayed indoors in a visitation suite, well-supervised during handling. Any animal who seemed stressed by the constant stream of attention got a break away from the action. 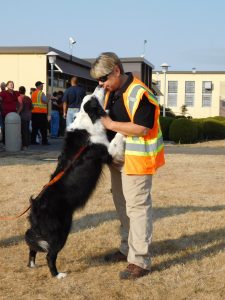 Janine Catalino, WHS Volunteer Manager, said, “I was really proud of our team. Everyone worked together extremely well, from organizing at the shelter before the event, to returning the dogs and kittens safely home. The kittens left the event first. There was a moment as we were leaving that I looked back and saw the dog handlers, waiting for the signal to go through security. They were all standing 10 feet apart in the field, dogs all under control.  It was impressive. I wish I could have gotten a picture of that. Of course, the magic was seeing the interaction between inmates and the animals: People falling in love with Patience and Joshie, our [pit bull] breed ambassadors, inmates cuddling kittens, and the kittens falling asleep in their arms.”
The event broke down stereotypes and cast aside judgments. Volunteer Laurel Hines told this story:
“While sitting with Joshie, a prisoner and his female guest came over. She was afraid to get down near Joshie because she said she had mild PTSD from having been bitten on the face once from a dog in the past and was afraid of big dogs. However, after talking a while and seeing how calm Joshie was, she sat down and was petting him. She was soon pretty comfortable and petting Joshie.”
“She was having a nice, relaxed time.  Big step for her,” added volunteer Julie Young.
WHS cat volunteer Marilyn Scahill shared her experience in the kitten visitation room:
“One inmate gently accepted a tiny kitten into his big hands. He sat down on the floor while the kitten attempted to climb up to cuddle into his neck.  He laid back on to the floor where the kitten promptly nodded off to sleep, curled up on his chest.  The inmate’s guest asked, ‘How long has it been since you’ve held a cat?’ His response: 22 years.  Another inmate came in and the only cat available to hold was a rather feisty older black kitten named Midnight. After having been too much for several others to handle, within minutes Midnight settled into his arms accepting the chin scratches and cuddles and even gracing him with a number of kitty kisses.  What a sense of pride and nurturing was experienced by both cat and man.”

Most of the volunteers shared comments about how respectful all the inmates were. Others shared how grateful they were to attend the Dog Days event.
Behavior Program Manager Catherine Comden worked with the carefully selected men who have been training Doc three years ago. Addressing the inmates and their families, Catherine said, “The transformation in Doc’s behavior is what positive reinforcement training is all about. You have experienced this first-hand; how noticing the good efforts, rewarding every little try; how this seeps into your life and affects how you begin to treat others.” Doc’s inmate handlers agreed. Doc and handler Steven Tynan demonstrated the effects of all their work by passing an AKC Canine Good Citizen test. With his release coming in about a month, Tynan repeatedly expressed gratitude for what he has learned through training Doc. He hopes to volunteer at a shelter in Eugene where he will be attending the University of Oregon.
Betsy Bode, Operations Manager, said, “I saw lots of unconditional love, which was so rewarding for both the humans and the animals. I hope to be a part of this event in the future and look forward to expanding our partnership with the prison.”
She also said the OSCI Dog Handlers Club’s generous donation will be used to improve the WHS dog play yards. The play yards were a gift from inmates to benefit the shelter dogs. These same dogs blessed the people who honored the dog that came from WHS to help the inmates. What a wonderful circle that is. We can hardly wait ‘til next year.