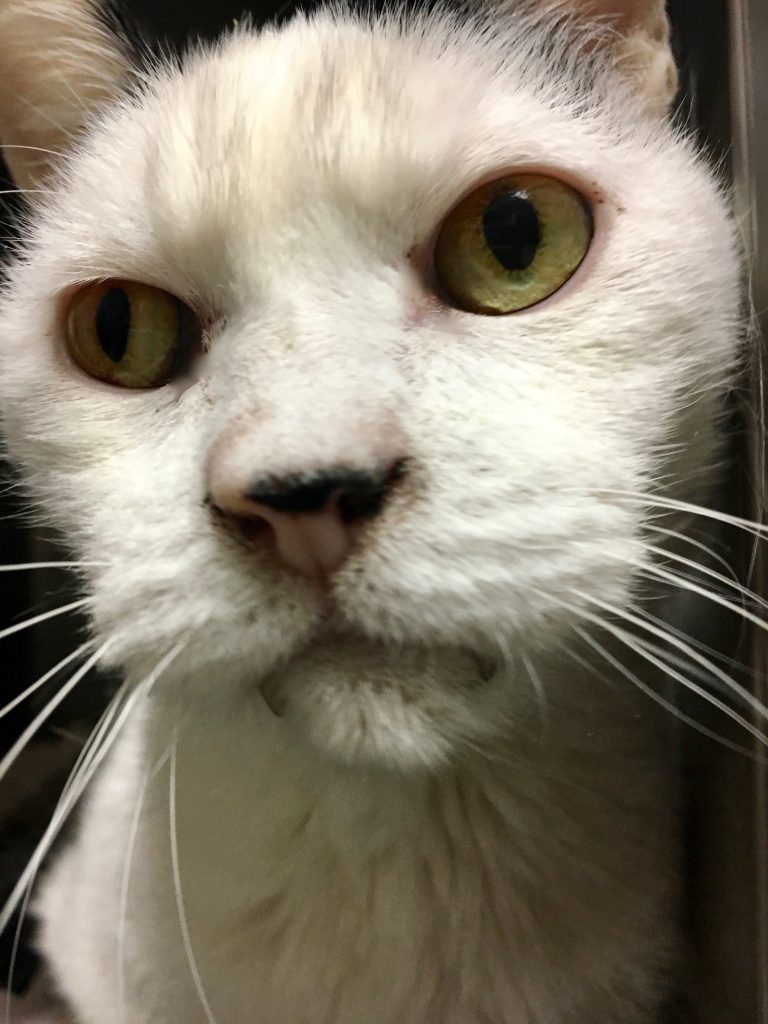 Last month was a great month for shelter cats at Willamette Humane Society. Thanks to the generosity of a wonderful donor, adult cats went home with no adoption fee. And that meant many cats found their perfect homes for Christmas.
You might think that the shelter would be totally empty after a breakthrough giveaway like that. But you’d be wrong. There are still plenty of cats that need caring homes, and all of them are still waiting for you in the shelter system. This week, I’d like to tell you about four of them.

First up is this handsome 13yo cat named Cyrus. He came into the shelter in October, and he was available for adoption during the special, but he was in the quarantine rooms due to an illness. As a result, he was overlooked by potential families. 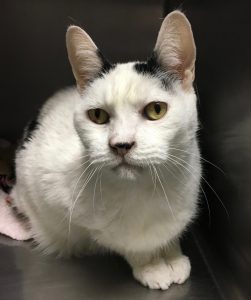 Once you come into the shelter, it’s hard to look past Cyrus. He has an incredibly handsome little face (some say he looks a little grumpy), and he always gets right up to meet people and tell them hello. Visits you might spend with Cyrus might involve a lot of hugging, as this guy likes to wrap his arms around the necks of the people he loves. One you have him in your arms, he rumbles with delight. It’s hard to let go. 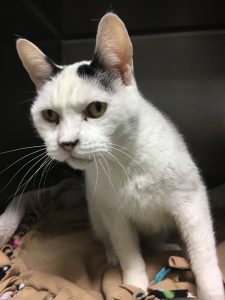 Cyrus had lived with the same family for all of his life, but his people developed significant health issues, and he was brought here for help. That family reported that Cyrus enjoyed both kids and other pets, including cats. That’s behavior we saw in the shelter. He lived in a suite with other cats and did wonderfully well with sharing food and space. He also liked kid visits.
But a family took him home, and they report that Cyrus most certainly does not like other pets, and he expressed his dislike through bad litterbox habits. It’s possible that the other pets were the problem, but it’s hard to tell. Cats can’t really tell us what they like and dislike. I can say that he’s been a dream with the pan while in the shelter. No problems at all. Introducing him to a home slowly could help him to accept new pets, and it would help to reinforce his good habits. That’s something all new cat parents should do, but it’s especially important for Cyrus.
Cyrus has early renal disease, so he will need a special diet.
Come get him!

Love can be elusive, especially for those who have very high standards. It’s something this sweet cat named Lorraine knows quite well. This is her third time in the shelter system. She has fallen in and out of love with so many people in the area, and we’d like this visit to be her last. 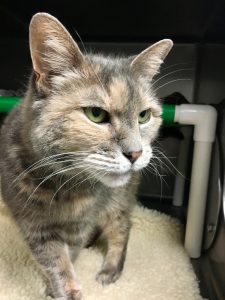 Lorraine is a 15yo cat who lived with a military family her whole life. Families like this move around quite often, and Lorraine had been lucky that she could come along for each move. But recently, her human was posted to an overseas spot, and Lorraine couldn’t make the trip. So she came here for help.
During her first visit, Lorraine had a very large cyst removed from the top of her head. It was benign, but the surgery left her looking a little rough around the edges. It was hard for her to get adopted, but she did. And then she came back due to not liking the family dog. 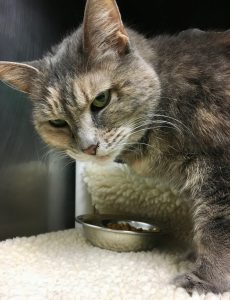 Another adoption fell through due to a dislike for the other cats in the home. Lorraine expressed her displeasure through inappropriate litter box use. So again, she came back.
Given these two experiences, we’re suggesting that Lorraine stay away from homes with dogs and/or cats. She really is a little princess kitty, and she needs to be your one and only. 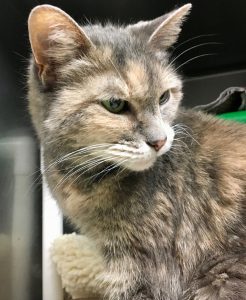 We know, however, that Lorraine absolutely adores children. She is very patient with little ones, and she seems capable of holding conversations. They ask questions, and she meows her response. It’s adorable. I think Lorraine would love to have a little human of her very own.
Lorraine has kidney disease, so she will need a special diet. She’s also been declawed on all four paws, so she will need to be an indoor-only cat.
Come and get her!

Are you a sucker for all-black cats? I sure am. And this guy has real beauty you just have to see to believe. His name is Bagheera, and he’s about 7yo. 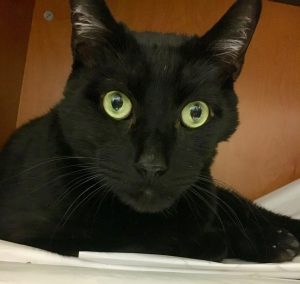 Bagheera came to the shelter as a stray, and when he arrived, he was in rough shape. He had a cyst on his face, and a rough spot on his leg. He was also absolutely terrified of everything he encountered and everyone he met. He spent his first few days cowering and hissing, and we were afraid he wouldn’t adjust enough to become an adoptable kitty.
When he was calm and could be handled, Bagheera went into surgery. And suddenly, his behavior made more sense. That gash on this cat’s leg was made by a BB pellet. Since Bagheera is afraid of loud noises and humans, it seems at least possible that he was shot by someone. That could explain why he was so terrified. 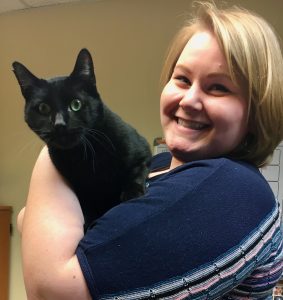 The staff worked and worked with him to help reduce his anxiety, and they moved him into a temporary kennel in the office of our wonderful volunteer manager. Here, his loving personality began to shine. Apparently, this is a lap kitty that excels at delivering head butts and purrs. He forms strong bonds very quickly with humans who treat him right. And those he have chosen have nothing but wonderful things to say about how sweet, affectionate and funny he is. He deserves a better life than the one he had.
Bagheera continues to be fearful of people he’s just met. He was a little afraid of me, as you can see (what huge pupils!). So potential families should expect to spend quite a bit of time wooing him. And they will need to take things slowly when they get him home. Spending time in just one room, and then another, and then another allows this guy to find his bearings at a pace that’s comfortable for him. He can’t be rushed.
It’s unclear if Bagheera would do well with cats or dogs or children. We don’t know his history, and he hasn’t interacted with these creatures during his time at the shelter. But I suspect that his roommates would need to be very mellow and very confident. They should expect hissing at meetings and fear when this guy is surprised.
Everyone at the shelter just loves this guy. He’s been through so much trauma, and he deserves to recover with people who love him. Could it be you?

Sorry to pick favorites, but I’ve done it this week. Meet Kit Kat. She’s an 8yo longhair kitty with beautiful tortishell coloring and blue eyes. She is a very big girl at 15 pounds, and she certainly should lose weight. When she does, she’ll be even more gorgeous than she is now (if that’s possible). 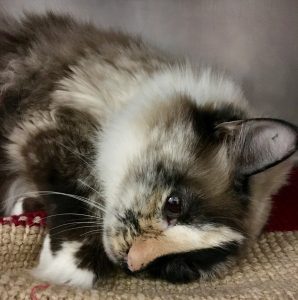 Kit Kat has what we call poor kennel presentation. She often hunkers down in the back of her kennel, behind her litter box. Her eyes are naturally wide, so she often looks a little stunned. Put these things together, and you have a cat that seems terrified and unfriendly. Nothing could be further from the truth.
Kit-Kat is a purring and rolling machine when you talk with her. She bats those blue eyes of hers and curls her toes and arches her back to meet your fingers. I can’t think of another cat I’ve met lately that is this enthusiastic about being petted. It’s really something. 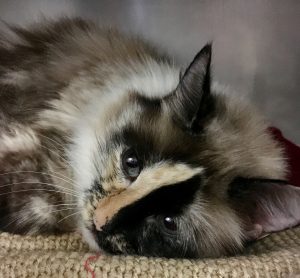 Kit-Kat’s path to the shelter is a sad one. She had one family she adored, but that family moved away and left her behind. She stayed with the remaining roommate, and during that time, she stopped using the box properly.
We are testing KK now, as it’s quite possible that she has an underlying medical condition that would explain the peeing. But it’s also possible that this was just a tough time for KK, and she expressed her sorrow and loss through her box. Cats only have so many ways to communicate, and sometimes, they make less-than-ideal choices. I’m hoping a compassionate family will help her process her grief and heal her body. That could help the box issue cease for good. 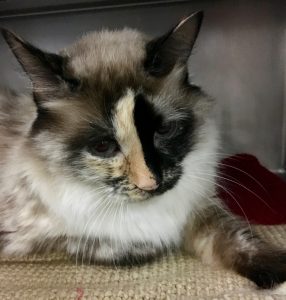 KK is not a fan of kids, and her history with dogs and cats is unclear. Come get her!