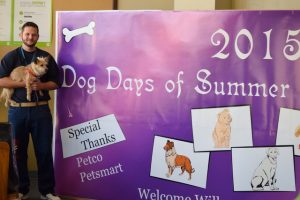 When Border Collie Doc was adopted by the Oregon State Correctional Institution two years ago as a wildlife management canine, the inmates immediately began working together to find a way to give back to Willamette Humane Society.  “Doc means so much to us because he doesn’t see our crimes – he only sees us,” one inmate said.

OSCI inmates brought Dog Days of Summer  to fruition with guidance from Captain Tammy Norton, support from the administration at OSCI, sponsorship from Petco, Pet Smart and others. Volunteers and staff from Willamette Humane Society were invited to join inmates and their visiting family members in the courtyard visiting area at the prison on August 31, 2015 for an outdoor barbeque and games. WHS Volunteer Manager Kim Berg commented, “It was like a family reunion picnic in the park.” 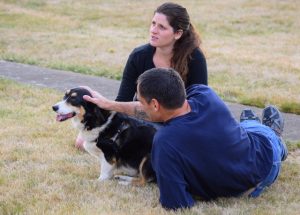 More than thirty inmates attended with nearly as many guests. Nine adoptable dogs were brought in by a group of volunteers and staff from WHS. The goal was to raise money on behalf of Doc, and they did. The inmates presented Behavior Program Manager Catherine Comden a check for $800 and ten handmade fleece covered beds produced by the OSCI inmate crochet club.

Additionally, inmates and their families participated in competitive games on behalf of the shelter dogs. The largest prize went to a small terrier named James, who received an enormous bag of goodies  that had been donated by Petco and PetSmart  and which will go with him to his new home. Four other lucky dogs, Cooper, Mr. Miyagi, Helena and Helia also won prizes. 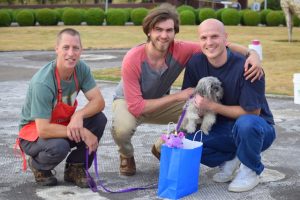 The event was also thrilling for the volunteers and WHS staff who attended.

Volunteer Marianne Fox exclaimed, “It was a fantastic experience that had a profound impact on me. The inmates were so welcoming and genuinely appreciative.  I was thanked over and over again for taking the time to be with them. One inmate in particular made a huge impression on me. He was so kind and gentle and calm.  He told me he had been incarcerated there for 27 years. He was so loving with all the dogs and told me that the experience meant an enormous amount to him as he told me his name and shook my hand.  His gratitude was so genuine, and I could not help but feel emotional. My being there with a dog seemed like such a simple thing, yet it meant more to him than I could have imagined.”

The dogs also seemed to enjoy themselves. Training Team Volunteer Linda Crosby said, “My charge, Mcgruff, a 8-month old terrier mix had a great time. A regular little terrier at first but was willing to settle by the end of the night. (It was) a good experience for him.” 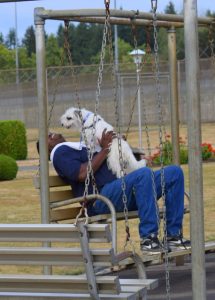 Most of the dogs who attended had similar experiences and it was clear to everyone that the dogs loved being the center of attention and having a respite away from the kennels.

Many questions were asked about the dogs and visitors wondered how soon these dogs could go to their new homes. Volunteer Eric Pierce said, “A few of the families wanted to adopt Mr. Miyagi on the spot.”

WHS Shelter Manager Rachel Backer confirmed, “I’ve had several phone calls and emails from a family member of an inmate who is extremely interested in adopting one of the dogs from the event.” 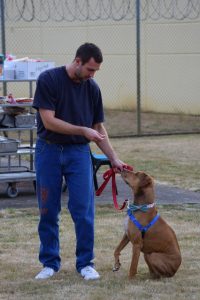 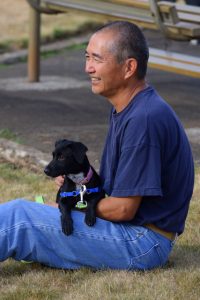 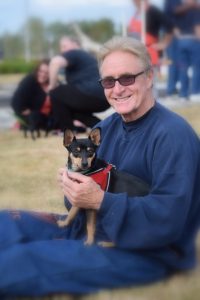 Captain Norton commented that many of the inmates who participated were so excited by the gathering that they “were up all night and couldn’t sleep!” They can’t wait to do it again. Those of us who represented WHS feel the same way, and we are all sure the dogs would agree.

Catherine Comden, CPDT-KA
Behavior Program Manager at Willamette Humane Society
Named “the dog lady” by peers in grammar school, Catherine Comden, CPDT-KA first became a California licensed veterinary technician, then finished a BA in Psychology while doing undergraduate research on the human-canine bond at the University of Montana. After that, she was recruited by the Purdue University Veterinary Teaching Hospital to develop the ABC puppy school, to assist during veterinary behavior consultations and to help create and instruct the Purdue DOGS! behavior modification course for veterinary staff. Catherine is now an adjunct faculty member at Chemeketa Community College in Salem, Oregon and instructor for the state’s only community college level professional dog trainer certification preparation program which began in Fall 2014. 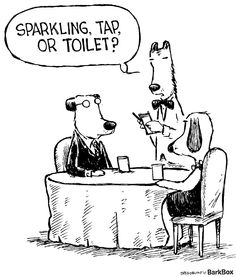 Go the Extra Mile at Our 2017 Mutts on the Mile