After a bit of a fall hiatus, the cat blog is back! And it’s just in time. That cat kennels at Willamette Humane Society are very full with all sorts of purring sweeties that need a home for the holidays. Today, I’ll feature seven special cat sweeties. If you see one that touches your heart, I hope you’ll come down and take that cat home!
So let’s get started.

First up is this dapper tuxedo cat named King Dude. He has the sad distinction of the longest shelter stay of any cat in the facility right now. He came in on September 2nd, and he’s been waiting for a home ever since.

King Dude was found as a stray cat in the community, which means we don’t know exactly how old he is. But the veterinarians suggest that he’s about 8. When he came to the shelter, we thought he must have struggled for food, as he was incredibly thin. As it turns out, King has a bit of a thyroid issue. With medications and the proper food, he is gaining weight and getting stronger. But that’s a regimen his new family will need to continue.
King is a volunteer favorite, due to his calm and gentle manner. He is the first to greet people in his suite, and he loves to chirp and cheep his way through a visit with people he loves. He likes to have his head scratched, and he seems to really enjoy it when humans talk with him. He also really enjoys being brushed.

King gets along quite well with other cats, so he should be able to integrate with the proper introductions. Since he can be a little feisty with medical handling, he might not be ideal for a home with very small children, but older children might be fine. And we’re not sure how he’ll do with dogs.
Due to an absolutely wonderful Secret Santa who paid adoption fees for our shelter cat seniors (more on that here), King comes with no adoption fee. You can just pop in and take him away with you, and spend the money you might spend on his adoption on soft beds and plenty of toys.
He’s been here too long. Can you help?

This self-possessed little guy is Apples. He’s about 12yo, and he is in very good health with no real complaints or issues to tell his new people about. He likes to think of himself as middle aged, but since he is considered a senior, he also comes with no adoption fee.

The volunteers I talked with this morning told me Apples had a bit of a tough time adjusting to the shelter, and he spent his first few weeks hiding from visitors. But he seems to have found his inner confidence now. He was happy to meet me and he posed so nicely for his photos with no hopping away due to fear.
This was my first time meeting him, so he was a little reserved with me. But I’ve been told Apples likes to give kitty kisses to people he knows well. He grabs hands and licks them with such sweetness. I think that’s adorable!

Apples came to the shelter due to a history of aggression with the family dog, and I think I may have some ideas about why that happened. Apples has been declawed in front, and it’s likely that he gets worried about dogs due to his lack of weaponry. Many declawed cats feel this way.
Since Apples has that history, he shouldn’t go into a home with dogs. He does have a history of success with other cats, but it might be best to take introductions slowly and carefully, so Apples doesn’t feel as though he must fight to stay safe.
Come meet him!

I have a soft spot for black cats. These mini-panthers have such inner beauty and outer elegance, and this sweetheart is no exception. Her name is Rose, and she’s about 2yo. She came to the shelter very recently due to cat overcrowding in her last home.

Since Rose is new to the shelter, she hasn’t quite adjusted to all of the noise and clamoring around her. So she spends a lot of time in the back of her kennel, where it’s hard to see her. And that’s a shame, as this is a cat that loves people. She warmed right up to me after just 10 seconds of talking and coaxing, and she purred and rubbed her head and kneaded her paws like crazy during our visit. I absolutely love this sweet cat.

Rose gets along nicely with other cats, and she seems patient with the kitten neighbors she has now. She could go into a home with other cats quite nicely. Since she is timid, she might not enjoy life with rambunctious dogs or children, but she might like calm roomies of any species with the right introduction.
Black cats like Rose are so easy to overlook. But at 2yo, Rose has a lot to offer. Her health is robust, she is done with the kitten nonsense and she knows how to interact with humans in an appropriate manner. She’s a package deal. Come get her!

Next up is another senior that qualifies for the grant program, so you can take her home for free. Her name is Cricket, and she’s a 12yo orange tabby. It is awfully rare to see orange tabby markings on a female, especially deep russet colors as Cricket has, so this girl is a bit of a rarity.

Cricket was found as a stray, and she does have some health problems. She has thyroid disease, so she is very thin. And she has some dental disease, so her teeth bother her and she doesn’t clean her face as well as she should. Someone who takes in this girl should think of this as a hospice adoption. She won’t be around long, but she deserves a soft place to land.
And Cricket has so much to give. She is sweet and curious about everything you’re doing, and she wants to be involved. She swatted my pen when I was writing notes, tried to get into my bag to play with the camera and tried to walk out the door with me when I was done. She had opinions about when and how she should be petted, and she had many things to mewl at me during the visit.

I love this sweet and sassy senior, and I want her to end her life in a home with someone who loves her as much as I do. Cricket can go into a home with other cats, but since she is so weak, she will need roommates that give her space and don’t knock her down. That might mean dogs are out.
Can you help?

If you love the tabby look but want a slightly younger model, might I suggest Charlie Boy? This guy is 5yo, and he is very new to the shelter. His people are moving and can’t take him along, and they brought Charlie to the shelter just a few days ago.

This big boy is a total sucker for sweet talk. I spent just a few moments talking to him, and he was suddenly kneading and purring and chirping and head butting. He really wanted me to pick him up and cart him away, I think. And he looked so despondent when I had to close the door and walk away.

Charlie has a good history of life with both cats and dogs, and he seems to enjoy the company of children. He has no real health issues to worry a new family, and he is so friendly and sweet that he’s sure to win over a family soon. I don’t expect him to last long at the shelter. Come see him!

Most of us would love to have cats that live very long lives. The longer they live, the more we can enjoy them. This cat, Static, should give us all a lot of hope. He’s a whopping 18yo.

Static lived with the same family for much of his life, but his person fell ill and gave him to a family friend. That happened about 3 years ago, and now the new family also had an illness. So Static came here in the hopes of finding his forever family.
Static came to the shelter on October 28th, and no one has taken him home yet. That’s a very long wait for an old guy, but Static is taking things in stride. Just look at how much affection he shows his visitors! He seems to have hope that today will be his day to go home.

Static does have FIV, which is a blood-borne infection transmitted via cat bites. He can go into a home with other cats, and he enjoys life with other cats. But introductions should go very slowly, so the resident cat doesn’t feel compelled to bite Static.
Static also has a good history of enjoying life with dogs, and he appreciates the company of children. His past owner says that Static often likes to keep himself to himself during the day, and then come to his people for affection in the evening. That makes him a good fit for busy families. He can keep himself entertained.

All of us who are associated with the shelter are heartbroken to see this guy just waiting for a home, when we know he’s the sort of cat that would fit in almost anywhere. We’re hoping that, since his adoption fee has been waived, someone will take a chance on him this weekend. Can you help?

I’ve spent a lot of time talking about adult cats here. But I feel compelled to point out that there are many, many kittens in the shelter now. We had a late blossoming of kittens in Salem this year, so we have many more kittens than we’re accustomed to as the holidays roll around.
Including this kitten, who is very special to me. Meet Eartha Kit-Kat. 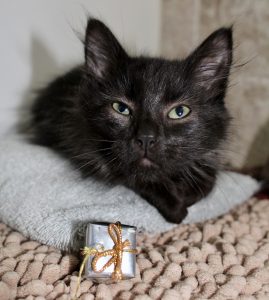 Eartha is my foster kitten, and she’s been with me in my home, learning the ropes, for a little more than a month. She came from a feral cat colony in Salem, and she was a little skittish when she arrived. As part of her training, I carried her around in a pack for most of her month with me. As a result, she’s a kitten that loves to be carried and who can handle herself in public places quite nicely. If you’ve been looking for an emotional support kitten, she might be a good fit.
Eartha is a timid little thing who loves the company of both cats and dogs, but she remains worried of loud noises. She will need a home on the quiet side, and she will need to be an indoor-only kitty: She had a vaccine reaction, and likely won’t be able to get regular boosters of vaccines as she ages.
Eartha will be up for adoption next Saturday (12/10). Can’t wait that long? There are tons of other kittens in the shelter. Come see!
That’s it for this month! Please share this post far and wide so we can get these cats adopted. And remember the senior cat promotion: Seniors go home free!