This week, I have three very special adult cats to tell you about. One of these cats is a long-timer cat that we will all miss terribly when he is adopted, and the other two are favorites among volunteers. I’ve been asked to tell you about these two cats specifically, and I hope you’ll take them home. Finally, we’ll wrap things up with mentions of two kittens that have been overlooked in the shelter.

Darius: Waiting for You Since September 22

This big guy is Darius, and he is about 8 years old. We are all in love with his adorable, chubby cheeks. Aren’t you tempted to reach out and touch him?

Darius came to us as a stray cat, and given his condition, we assume he had been living on his own on the streets for quite some time. He had matted fur, torn ears, plenty of fleas, and other signs of neglect. But unlike some of the community cats that come into the shelter, Darius arrived with nothing but love for his caregivers. He treats everyone he meets with a greeting involving chirps, purrs, and head butts. It’s hard to find a friendlier cat.

Darius is similarly friendly with all of the cats he meets. He likes to groom other cats, and he is an exceptional wrestler. He has a trademark flying tackle that’s really something to see. He stops rough play as soon as he’s asked to do so, but we can see him being a really wonderful playmate for an active cat friend.

Darius would love to join your family for the holidays. Can you make his dream come true?

Suzy Q: Waiting for You Since October 14

This sweet kitty is a relative newcomer to the shelter, and with your help, her visit will be a short one. Her name is Suzy Q, and she came to the shelter as a stray cat. We think she is about 2 years old, and we know she is absolutely gorgeous. She has long, calico-patterned fur and the prettiest eyes. She really is a showstopper.

Suzy Q came to the shelter as a stray cat, so we don’t know a lot about her history. She can be a little shy with people she has never met, but she is very loving with those she knows well. This seems to suggest she had a home at some point, but we’re not sure what that home was like.

At one point, this sweet cat was adopted. But she spent the first night in her adoptive home feeling uncomfortable, and that meant she yelled a lot. That home had other cats, and it could be that Suzy doesn’t enjoy life with other animals. It could also be that Suzy is slow to adjust to new things and will need a family that will allow her to be a little upset until she learns she is in her forever home. In either case, she is looking for cat-savvy people to help her. Could that be you?

Drako: Waiting for You Since August 25

This sweet guy is Drako, and he’s the long-term resident I’ve been telling you about. He’s been in the shelter system since this summer, and he’s been featured on this blog many times. Even so, he hasn’t found a home that is right for him quite yet. As much as we will all miss him (especially those of us that take photographs, as he is an exceptional model), we are hoping he will go home very soon.

Drako came to the shelter due to divorce, and we learned that he was accustomed to living with both dogs and cats in his home. He also had a good history with children, but he can take time to adjust to them.

Drako also took time to adjust to the shelter, and he was very worried when he first arrived. With time, he blossomed into a playful and loving little guy, and we were all thrilled when he went home. Unfortunately, he was not a good fit for that home and came back quickly. He’s been waiting ever since.

Drako is just a pleasure to have around. He is very loving and sweet, and he has remarkable cat-to-cat skills. He likes to both cuddle with and play with other cats, and he picks up cues fast. If they want to stop a play session, he never complains. He also seems to care little about dogs walking by.

Perfect kitties like this shouldn’t linger in the shelter, but this guy has. Can you make his long wait come to an end?

I don’t feature kittens on this blog very frequently, as they are usually adopted quickly and don’t need much marketing support. However, there are some little kittens that adopters seem to pass right by, and those wee ones do need a little push. Let me tell you about two of them.

Enchantress here is an all-black, shorthaired 2-month-old kitten that was found on her own in Salem. She has been described as wonderfully cuddly and affectionate, and she apparently loves to watch television programs that feature birds. She was nothing but sweet during our photo shoot, and she felt right at home cuddled in my neck. But she doesn’t linger at the front of her kennel, so she can be hard to see. She is worth watching for, however! Come to get her!

Twix is a 5-month-old harlequin male kitten that also came to the shelter as a stray cat. He arrived at the end of September, and as adorable as he is, he hasn’t been chosen by a family yet. That could be because this kitty can be a little shy. He tends to lurk in his bed rather than leaping out to meet visitors, although he is nothing but loving when people do reach out to pet and cuddle him. He gets along quite nicely with cats of all ages, and while we’re not sure how he feels about dogs, he might do well with cat-savvy canine friends with the right introductions. He can go home with kids as young as 8. Come to visit him!

That’s it for this week. We’re all really hoping you will be moved to adopt one of these wonderful cats this week. And if you can’t adopt but still want to help, click on the names of the cats in the bold subheadings to support them with a donation. That is always appreciated, and it is a wonderful way to help the cats. And do share these stories if you can. While you might not be able to adopt, someone in your circle might. Thank you!

Favorite Cats of Marilyn and Kim – May 19th 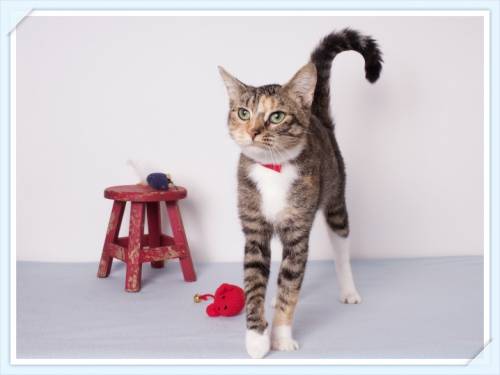