In the market for a new cat to love? You’re in luck. During today’s visit, I met up with four simply wonderful cats, most of which have been waiting for a home for quite some time. It’s a surprise, because this might be the most affectionate group of cats I’ve ever worked with. Why aren’t they moving? Let’s find out, shall we?

First up is this sweet tortie cat, Carter. This girl is just 2 years old, which makes her one of the youngest cats in the shelter right now. But she has been waiting for a home since March 25th, which also makes Carter one of our long-term residents.

Carter’s long stay might be due, in part, to that fact that this is a pretty lazy and relaxed cat. She likes to spend time snoozing in her bed, way back up in her kennel. She doesn’t spend time trying to wow her visitors. If she isn’t eating, she is sleeping. And that means she is a little invisible.

But if you take the time to open up Carter’s kennel and introduce yourself, her real beauty will shine through. Carter absolutely adores any kind of affection from people. Today, she rolled and purred and kneaded and otherwise thoroughly enjoyed our little visit.

Carter came to us as a stray, so we don’t know about her history with other animals. We do know that she was chased by neighborhood cats at one point, but we don’t know how that will impact her ability to live with new cats. With a slow and gentle introduction, things might be fine. But you will need to take it slow, since it is a bit of an unknown.

Also, Carter has a history of swatting at people when she is done with the whole petting thing. She didn’t do it to me, but I’ve been told she hits gently with claws in. That means she isn’t trying to harm as much as communicate. But it does mean that children will need to respect her space. Some cats that swat escalate to bigger behaviors. If tiny kids are in the home, Carter will need a space to get away so she can make better choices.

I just love this girl. Don’t you? Come visit!

This sweet face belongs to an 8yo brown tabby boy named Mikey. He is another very long-term resident, as he came to us on March 20th. And this is another profoundly lazy cat. Every time I see him, he is asleep or stretching out after a long nap. He is the sort of cat that is easy to overlook, simply because he doesn’t try to get your attention.

That’s a shame, as Mikey would probably get snapped up in a heartbeat if he just tried to sell his services a little better. People looking for cats often want very affectionate sweeties who enjoy spending time in a person’s lap. Mikey fits that bill quite nicely.

As soon as you sit down in his suite, Mikey will crawl into your lap for a long visit. He spent about 20 minutes on my lap today, kneading with his claws, purring, and drooling with happiness. He never did settle down into a nap when I was visiting. He spent the entire visit showing me how happy he was that someone was spending time with him. I just love that.

Mikey also has something pretty special. See those feet? He has extra toes on both front feet. People who love polydactyl cats will absolutely love him. I didn’t quite count how many extra toes he has, but it looks like he has a lot!

Mikey came to the shelter due to a profound illness in his beloved person. In his last home, he lived happily with cats. But, he did develop FIV during the course of his life. That means if he does go into a home with other cats, introductions will need to move very slowly. Deep, penetrating cat bites are the primary vector for FIV infections. Cats bite like that when they fight. And often, cats fight when they are introduced too quickly. Avoiding those speedy introductions will be the key to integrating Mikey into a home with another cat.

I hope Mikey’s FIV status won’t scare you away. If you’ve been waiting for a cat to warm your lap, this cat is it!

I met this 4yo brown tabby about a week ago, when he first arrived in the shelter. He was much too worried to even visit with me. The entire time I worked with him, he cowered in his bed.

What a difference a week makes!

Turbo has decided that the best way to get out of a shelter is to wow visitors. And wow he does. He rolls and purrs and kneads and plays. He chirps and cheeps and pokes his paws out of his kennel. This is a guy that wants you to notice him, and he wants to go home right now.

Turbo has a great history of living with both cats and kids. And he is very affectionate with almost everyone he meets. But, he isn’t the sort of cat that can be thrust into any home without a proper introduction and proper coaching. That shyness he showed when he appeared in the shelter is likely to show back up when he goes home with a family. He will need a room-by-room introduction to a new house. And he will need people who are patient with him as he adjusts.

This guy is just a darling, and I think we should reward his decision to be bold and brassy. Come visit!

This is our longest resident in the shelter. Sweet 13yo King George has been with us since March 7th. When I put him on the cat blog last week, I felt certain that someone would take this darling boy home. But this week, he’s still here.

George is another lazy boy that does not come down from his bed to claim your attention. But look at what he does when you do open up that door. Notice the big hug he is giving my fellow volunteer this morning. This is a full-body, purr-in-your-ear hug. If he really likes you, he’ll chin rub your head during a hug, too.

George is a shelter favorite, so he gets a lot of hugs throughout the day. In fact, four people stopped me this morning and mentioned that they had gotten their hugs on. I know we all love him. But we think his hugs will be even more meaningful when they are given to this guy’s forever family. Can you help?

That’s it for this week! Remember: If you see a cat here that touches your heart, click the names and you’ll head to a donation page. We appreciate any donation, no matter how small, to help the cats.

And you can do something else, too: Share these stories. It’s hard for long-term residents to keep up hope that someone will choose them. A month in the shelter is just too hard on an old cat. Let’s get all of these guys out this week!

Thanks for all you do. 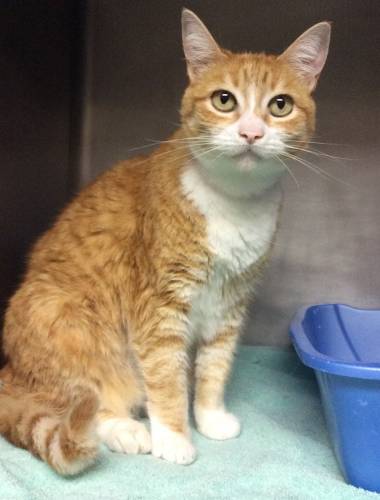