Every cat adoption should be a forever adoption. But sometimes, circumstances with a cat, a cat’s family or both can prompt a cat to come back to us after the adoption is complete. It’s pretty rare, but it does happen.

And this week, I have three cats to tell you about that are all adoption returns. They’re all amazingly sweet and darling, but they all need adoption do-overs. And here’s the best part: They all qualify for the Free the 50 deal, so they can all be adopted for free.

So let’s get started.

First up is this 7 year old sweetie named Peter Cottontail. During his first round in the shelter, he was a shy and withdrawn little guy that needed a little coaxing to come out of his shell. We were all thrilled that a family took a chance on him, and they really did work miracles. With the love of that family, he blossomed into a confident, superbly affectionate cat. More on that in a bit.

But unfortunately, as Peter got more confident, he also got a little more aggressive. He was living with other kitties, and he started smacking them around quite a bit. That was a very unexpected behavior, and when it appeared, his family really had no choice but to bring him back to us.

If you have no other pets, Peter could be a wonderful companion. Once he knows you, he is remarkably affectionate. He gave me several very forceful head butts as a sort of acceptance move, and then he grunted and snorted and mewled at me until I sat down with him. He settled right in for a very long petting session, and then trotted off to play with his scratching post. I love this guy.

Peter’s family says he’s not fond of fast movements (like those you’d make with a tennis racket), and he doesn’t enjoy tight spaces. But here’s a bonus: He also has a great history of living with children. Apparently, he loves them.

And check this out: He even has a heart on the back of his head. See it? So adorable.

Peter is resting in our biggest suite right now, and should you come to visit, he’ll probably be tucked up in his scratching post. Just look for him there.

Next up is Mouse. She’s a 5 year old sweetie I met for the first time several months ago. She came to the shelter at that point due to the health of her owner, and she struggled to perform in her kennel. She hid and smacked her lips and turned away from love. She was worried. So we were all thrilled when she was adopted into a patient and quiet home. It seemed just right for her. Unfortunately, that adopter had hidden allergies, and life with Mouse was just too hard on human health. So she’s back again.

Mouse is, once again, struggling to adapt to shelter life. I found her hiding in her litter box like this when I came in today. She’s a big believer in the “I fits I sits” rule, apparently.

But when Mouse actually had to USE the litter box, she popped up for some attention. She enjoyed my head and neck scritches, but I also discovered that this girl has a secret stash of sass. She gave me a few slaps for ending the pet sessions too soon. I love that attitude, as it suggests that there’s another Mouse in there that will blossom in the right home. She just needs to get out of the shelter so she can let her real personality shine through.

Mouse will need a cat-savvy adopter that’s willing to give her time and space to adjust to a new home. And apparently, she has a good history of life with other cats, but those introductions should move slowly due to her nervousness.

Next up is this 9-year-old fluffy tuxedo cat, with the unfortunate name of Lucky. Why unfortunate, you ask? Because it doesn’t seem to fit him very well at all.

Lucky came here originally when his family couldn’t keep him due to changing circumstances. And his adoptive family developed allergies. So he’s back again for another try. That’s not so lucky, right. But here’s the thing. I don’t expect Lucky to be here very long.

Lucky is, hands down, the most affectionate cat in the shelter right now. He whirled and whirled around my ankles today, and as soon as I sat down, he plopped right down into my lap. He gave me kitty kisses, head butts and little kneading claws of love. And he also let me pick him up and cuddle him. This is a cat that just loves, loves, LOVES to be handled, and there’s not a speck of sass in him.

Lucky has a history of living with other cats, but he wasn’t too fond of his suite mate this morning. That means he’ll need to take introductions to other cats on the slow side (and that’s always the best idea anyway). We’re not sure how he’d do with dogs.

Older children should be fine with this guy, however, as he is a confident cat that seems really comfortable with almost any sort of human interaction. If you’re at all intrigued by this kitty, you should come on down. He’s a real winner (and a volunteer favorite!), and since he’s got waived adoption fees, he’ll probably go fast.

Check out the peepers on this Russian blue kitty: Kenya. This is a 3-year-old girl that was abandoned by her previous owner, and didn’t fit in with the rescue family that tried to help. So she’s looking for new digs.

She can be a little shy seeming in her kennel, but don’t let her fool you. With 30 seconds of coaxing, this pretty cat was rolling around like a crazy fool for me this morning. I love her!

So that’s it for this week! Please share so we can get these guys adopted. 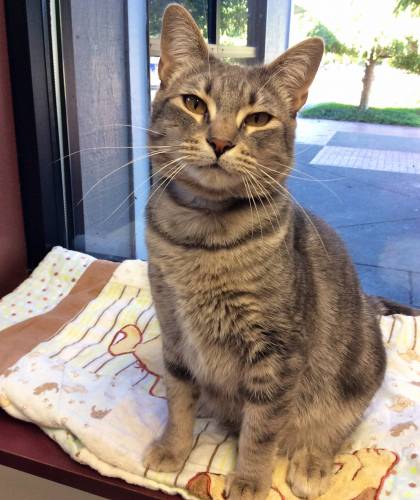 Meet Cracker Jack: A Whopper of a Cat