Cassidy was an older girl, pulled from a crowded shelter in LA where she didn’t stand a chance.  A grey-brown merle pitbull mix whose tail never stopped wagging, she had a shabby look that resembled the Skin Horse from the Velveteen Rabbit book. She had arthritis in her hips, worn teeth, a mass or two, teats saggy and stretched out from too many puppies, a torn ear and cloudy eyes. She also had terrible chronic ear infections, so bad that we sent her to a specialist, who surgically removed part of one ear canal that was so scarred and swollen it was unrepairable. The other ear also had cumulative damage from years of infections, but she needed to keep one ear open to hear, so we treated her with several antibiotics to get it under control.

She moved to the adoption floor and it took her no time at all to become a volunteer favorite, even though it took her 3 months to find her home. She was adopted and loved, but 2 years after her arrival at WHS she returned, through no fault of her own. Life changes had caused her person to have to move back with family members who were allergic to her. So Cassidy came back to us, tail wagging just as fast, ready to find a new person to love. Recognized instantly by her former fans, she went back to the adoption floor to wait for someone new to fall in love…

It didn’t take long! In less than a week, Marianne, one of our incredibly dedicated dog care volunteers, fell head over heels for her sweet disposition and happy, joy-filled demeanor. She took her home for foster respite, and never brought her back! Renamed Patience, for the way she never gave up on people,  she now receives top-shelf vet care for her ears and skin, and samples a wide variety of toys in search of the one that cannot be destroyed. Now Marianne’s Facebook posts are full of pictures of Patience: Patience playing, sleeping in piles of pillows, chewing on toys, walking with her fluffy white dog sibling, playing with shelter dogs at weekly playgroups, visiting neighborhood kids and generally transforming the world of one human through the love of a very big hearted, threadbare, love-a-bull dog.

'It doesn't happen all at once,' said the Skin Horse. 'You become. It takes a long time. That's why it doesn't happen often to people who break easily, or have sharp edges, or who have to be carefully kept. Generally, by the time you are Real, most of your hair has been loved off, and your eyes drop out and you get loose in your joints and very shabby. But these things don't matter at all, because once you are Real you can't be ugly, except to people who don't understand. But once you are Real you can't become unreal again. It lasts for always.' 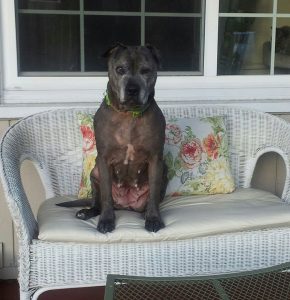 Thank you Marianne, for understanding. 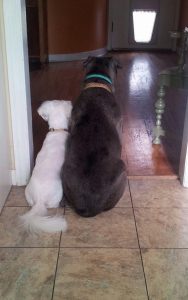 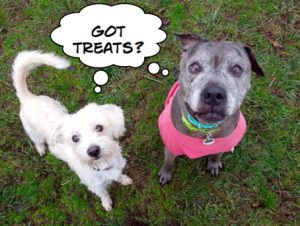 BJ
Executive Director at Willamette Humane Society
As a long-term employee of Willamette Humane Society, BJ Andersen has a deep commitment to the organization and its mission of providing compassionate services to pets and people.She has thrived in multiple operational positions at the shelter, including Adoption Lead, Kennel Manager, and most recently as Volunteer Manager.Andersen is known for her skills as a deep listener, a speaker, an innovator, a collaborative problem-solver, and a leader.
Latest posts by BJ (see all)
BJ's Blog

Apologies, but there are no posts to display.