It’s good to be back! I had a wonderful time visiting friends and family in Michigan. Being gone from the shelter for two weeks means many dogs were adopted and new dogs arrived. I spent Sunday meeting and taking pictures of newbies. I want to mention one very special adoption that happened on Sunday. Atom had arrived at WHS as a stray and a medical mess on September 13th. Because of his age, about nine, and multiple health issues, it would have been easy to decide that he was too old for the needed treatments. But Atom had such a sweet, gentle personality despite all of his problems, and WHS put the time and effort into making him healthy again. So you can imagine how thrilled we all were when a delightful young couple fell in love with this giant teddy bear and decided to take him home. I was so excited that I got to meet his new family!

And that’s not all! Watch for an update at the end of this post!

Henry has been spending time with the Behavior and Training Team to work on his skills and he is ready to be adopted! Henry is a four-year-old Chihuahua mix and is as smart as a whip! He came to us quite fearful of new people, has made huge gains, and has many friends at the shelter, especially volunteer and trainer, Linda. She has spent many hours teaching Henry skills like “leave it,” how to greet new people and search out scents. They also just have fun going for walks and car rides. He even helped Linda with some computer questions (see pictures). Henry will need a certain kind of home. He needs an adult only family (18+). He is not comfortable around children, most cats, or big dogs. He needs a quiet home where his people will make him feel secure. Henry has a terrific sense of humor, is house-trained, affectionate, and totally entertaining. We’re hoping his perfect person will find him very soon.

Henry has no idea that he is a small dog.

He caught on to “leave it” very quickly. Notice how closely he listens to instruction.

Here I am hanging out with Henry.

I’m not a youngster, but I will be your best friend!

Tasha is a nine-year-old Border Collie mix. She was found as a stray and arrived at the shelter on September 19th. Tasha is not a beauty, and she is easily overlooked in her kennel for younger, more vivacious dogs. But Tasha is extremely affectionate and her favorite place to be is around people. Because Tasha is shy at first meeting and is a senior, she would probably do best with older children. Tasha’s racing around the yard days are behind her, but she would love leisurely walks around the neighborhood. If you are looking for a laid-back, gentle, loving new family member, don’t walk past her kennel. Stop and meet our sweet Tasha. Here she is with some of her shelter friends, Elizabeth, Shannon, Marianne, Caitlin, and Jenna.

On Sunday we took her into Mary’s Place for some relaxation. Caitlin, Jenna, Caroline, Marianne and I are just a few of her fans.

I have improved soooo much since I arrived at WHS!

Pookie is an eleven-month-old Boxer mix and, at 44 pounds, is a perfect size for a family with older kids. When Pookie arrived at the shelter, she was quite shy and fearful, especially of men. After spending time working with the Behavior and Training team, she moved into a foster home where she thrived. Pookie is still working on gaining courage when meeting strangers, especially men, but given a little time, she warms up and bonds. She is affectionate, wants to please, and is very smart. She knows basic skills, though is still working on “stay.” Pookie’s new family will need to be committed to rewards-based training with her so that she continues to gain confidence. She would love to be in a home where someone was home all day with her, and will need to be the only pet. But oh, what a wonderful family member Pookie will become! She loves going for walks, playing fetch, and snuggling on the couch. We know the perfect family situation is out there for this sweet, shy girl. We just need to find it.

Today we took Pookie into Mary’s Place for some fun and boy did she have fun!

With so many new arrivals, I have quite a few Quick Looks this week!

Adeline is a two-year-old Chihuahua mix, here with Marianne.

Bugsy is also a two-year-old Chihuahua mix, here with both Marianne and Caroline.

Koda is an eleven-year-old American Eskimo mix, here with Jenna.

Laddie is Caroline’s current favorite. He is a five-year-old Siberian Husky/Collie mix.

Napoleon is a one-year-old mixed breed who knows a ton of stuff but never smiles, here with Marianne.

Otis, a seven-year-old Boxer mix, is volunteer Joan’s current favorite. She took him swimming last week and fell in love with this senior.

Here he is with Shannon and Elizabeth.

Sammy is a one-year-old Kelpie mix who LIVES for chasing tennis balls which he returns and drops for you. Here he is with Marianne.

Victor is a nine-month-old American Bulldog mix, here with Francis.

Remember Rusty? Here she was when she was at WHS. We all loved her so much and worried that she’d never get adopted. Well, she did and what a wonderful life she has!

“Hi! We were out at the food truck frenzy last night and greeted by many of Rusty’s friends from the shelter that were thrilled to see her! Just wanted to send an update. This summer we had several trips to the river and discovered how much Rusty loves the water. We already knew how much she loves to play fetch but playing fetch in the water is the best!! She still has her favorite green squeaky bone but has also gone thru a few tire chews and basketballs. It’s funny to see her carrying around a popped basketball in her mouth. For about a week she had a basketball that we hadn’t popped yet and she couldn’t get her jaw around to pop it so she ran around the yard pushing it and chasing it like a soccer dog. She has a bed in the living room where we spend most evenings but she would rather be laying on a couch or bed with one of us. She’s a bit spoiled in that way. She loves to go for rides in the car whether for a short trip to the store or a road trip to southern Oregon. This summer we got a mini van so she went from sharing the backseat in the civic to having her own space in the van. On a trip to Brookings we even put one of the seats down and put her bed in the back so she’d be comfortable the whole trip on the floor. She has brought so much joy to our family. She even finally won over my 92 year old grandpa who was hesitant for so long because of her “breed” it did take awhile for him to get past that but Rusty is the sweetest most gentle dog ever. We love her so much and she wins the heart of everyone she meets!”

And here is the Atom update I promised. We are over the moon for this boy’s new life!

“It feels like a week ago already! Hard to believe it was only about 24 hours. We are calling Atom “Buddy” at our house since we were told that this is the name they believe he was surrendered with at animal control and it seems to fit him nicely. Buddy seems to be settling in very well so far and is such a sweetheart and a goofball and a ton of fun! He is so easygoing and a perfect fit for our lifestyle and energy level. He is also a very patient and courteous gentleman on the leash (what a star)! I work at a self storage facility with a Resident Manager house attached and so far, so great! He loves the customers and they love seeing his big smooshy face smiling at them thru the baby gate when they walk in (his bed and toys are set up in the living room which is one room away from the office). We keep a baby gate at the office and one at the stairs to keep him from climbing up. He seemed just fine sleeping downstairs last night, we came down and checked on him several times and he is a very deep sleeper! Thank you again for all the love and care you devote to these dogs. We all benefit so much from it! We would love for you to share pics of a gorgeous pup lending his wonderful energy and personality to making our house in Salem even more of a home, and making office visits at this little storage business even more of a friendly and positive experience for our customers!”

On a personal note…

Even though this is a dog blog, I had a helper many nights when I’d be writing it. Well, “helper” might be an exaggeration. But our cat, CJ, was a constant presence and though he had strong opinions, he made us laugh often. Last week his kidney disease became too much and we knew we had to let him go. He went peacefully in my arms. This is the first post I have written without him curled up next to me in my recliner. Pets become such an integral part of our daily lives and are so missed when they are gone. But the joy that they give us is worth the sadness. 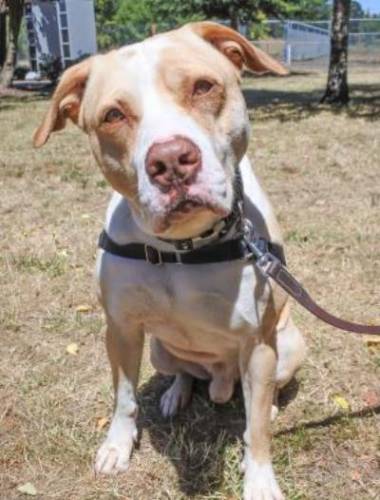