Last week at the shelter I met one hilarious little dog named Jolly. Volunteer Ayla told me that he loved big toys and that she was going to take him into Mary’s Place to play. Marianne and I decided to see what he thought of the Giant Fluff Ball. I don’t think the three of us have ever laughed so hard in our lives. I made a movie as soon as I got home and waited anxiously to post it as soon as he was available for adoption. Somehow Fox News 12 in Portland got the link and showed it on Friday morning. This resulted in quite a number of people showing up at WHS to meet Jolly Friday afternoon. He soon had three holds (the maximum). Since that time, his little movie has been viewed well over 1,000 times! So even though he’ll be going to his new home as soon as he’s neutered, I had to include his movie in this post. I hope you find it as funny as we did! It is quite the lesson in perseverance!

This issue should be called “Shelter Dogs and The Giant Fluff Ball.”

Leia is a nine-month-old mixed-breed dog who is a delightful young girl looking for an active feline-free home. She has been adopted twice and returned. The first family discovered that she was much too interested in their cat. The second family lived in an apartment and decided she had too much energy for small quarters. Both families reported that she is smart, very trainable, was fine riding in the car, house-trained, and social. On Sunday Caitlin, Marianne, and I took her and the Giant Fluff Ball into Mary’s Place. As you’ll see, it was her first meeting with a such a huge ball, but it didn’t take long for her to realize it was fun!

I’m a bit shy at first, but just wait until you get to know me!

Benji is a two-year-old Staffordshire Bull Terrier mix. He has improved so much since arriving at WHS as a fearful, shy boy. The Training and Behavior Team has been working with Benji and he is much braver and his affectionate nature is blossoming. He will need an understanding family with kids ten or older who will give him the time and love he needs to feel secure. He should go to a cat-free home. He gets along with some dogs, but seems to prefer being with humans. On Sunday we took him into Mary’s Place to relax and play. He turned out to be quite goofy!

It was his first experience with the Giant Fluff Ball and he viewed it very differently than did Leia, as you’ll see.

I’m new here and very unsure of myself. I could really use a new family who will love me.

Ebby is a thirteen-year-old Fox Terrier mix who is looking for a calm retirement home where she can relax and feel secure. She is very nervous in the shelter environment. She would be perfect for a retired couple looking for an uncomplicated, sweet dog. Ebby won’t need long walks or adventures, she’ll be very happy with short walks around the neighborhood, some tasty snacks (she loves cheese), and someone to snuggle with in the evening. She takes a little time getting to feel comfortable with new people, but once she does, she’s very loyal. She is house-trained, tolerant, and will quickly become a lapdog.

Sunday we took her into Mary’s Place, away from the noise of the kennels and she was so happy to get to spend time with us.

We took her back into Mary’s Place this afternoon. Someone is going to be very lucky to adopt this sweet senior!

I think I would be the perfect new family member for you!

Oh, my goodness. Marianne and I met Gunner for the first time on Sunday and boy, did we both fall for this wonderful, gentle lap dog! Yes, I did say lapdog! Gunner is a two-year-old Rottweiler mix. He came to us from another shelter, so we don’t know anything about his past, but the way he wants to lean against you and crawl into your lap, he must have been well loved. He has a handsome face, takes treats gently, and enjoyed spending time with us out in the yard. He has a cold at the moment, so is in the ISO kennels, but we can’t wait to take him into Mary’s Place when he’s well! Some family will be very lucky to find this special boy! After you see these pictures, do you see why I said “lapdog”?

Kaylee is a four-year-old American Pit Bull mix newbie from a partner shelter. She is so gentle, she would be fine with children eight and older. Here she is showing her sweet personality to Marianne.

Tisha is a five-year-old German Shepherd mix, here with Francis. She was found as a stray and is looking for a home with older children, no cats or small animals, since as a shepherd, she likes to give chase. But she’ll be a loyal companion.

Here was little Mimi last Sunday with volunteers Suesann and Kaila. Mimi was so nervous at the shelter, I’m happy to say that she’s now in a foster home; but she’s still hoping for her own family very soon. She is an eight-year-old Chihuahua mix.

Pookie is still waiting for her perfect family fit. Here she is with Jenna and Diane. Pookie is a one-year-old Boxer/American Staffordshire Terrier mix. She is sporting a cone after being spayed.

Bouncer (such a fitting name!), a two-year-old Rat Terrier mix, had a great time out with Gracie on Sunday.

Sabbath is a one-year-old Dogue de Bordeaux mix. I hadn’t spent any time with him before today, but oh, what fun we had. Ayla is a huge fan of his and wanted to bring him into Mary’s Place. Marianne and I had planned to head home before she brought him in. I stopped back in at Mary’s Place to pick up my camera equipment and that’s when I saw Sabbath on the couch snuggling with Ayla. I was hooked and had to stay for pictures. Yes, he was crazy about the Giant Fluff Ball and is one huge lap dog! What a wonderful boy he will be for the right family! I love his wrinkled forehead!

Durango is a two-year-old Shepherd mix who is one of our long-term residents/projects. The Training and Behavior Team has been working with him and today Linda took him into Mary’s Place to give him time just to be a dog. We had a lot of fun, as did he.

When I arrived at the shelter on Sunday, Public Playgroup was just ending and I got to see two of our favorite former long-term shelter dogs who had come to visit and romp. Both of these sweethearts had lengthy waits at WHS before they found wonderful homes where they are flourishing.

Later on Sunday afternoon, Ledi and her family came to visit! We’re always so happy to see our girl! And yes, Ledi still likes to sit on people, as Caitlin found out.

On those very happy notes, that’s it for this week!

Martha
Martha is an engaged volunteer dog walker, photographer, and blogger.
As the 2010 Humaneitarian Award recipient, her passion is promoting dogs for adoption through her engaging blog: adopt-an-oregon-dog.com.
Martha and her volunteer team interact with dogs each week on their walks, take photos, and post profiles and adoption updates to supporters.
Her intimate view of the dogs and the shelter highlights the joys and triumphs of volunteering.
Latest posts by Martha (see all)
adopt-an-oregon-dogadoptable dogsadoption dogsdeserving dogsdogsfellow dog lovershumane societyWHSwillamette humane society 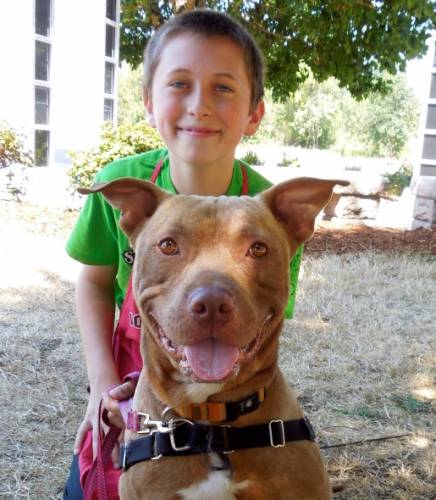