It was great to get back to play group on Sunday. I found the dogs to still be quite talkative, but first, let’s talk about last week’s adoptions. There were thirteen of them, eight of which were Blog Dogs. Here they are. 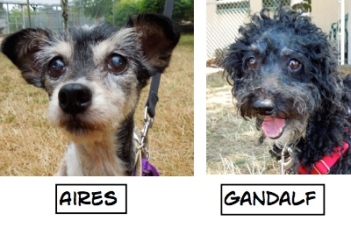 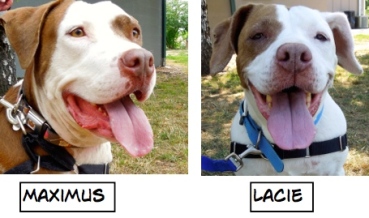 These are some very lucky dogs, but the families are very lucky, as well!

It’s been awhile since I’ve gotten to attend play group, but the chatter hasn’t stopped.

Max needs some foot surgery before he goes home, but his new family came to watch him in play group on Sunday.

Rockie had some wise advice for Hank, but I’m not sure Hank listened. 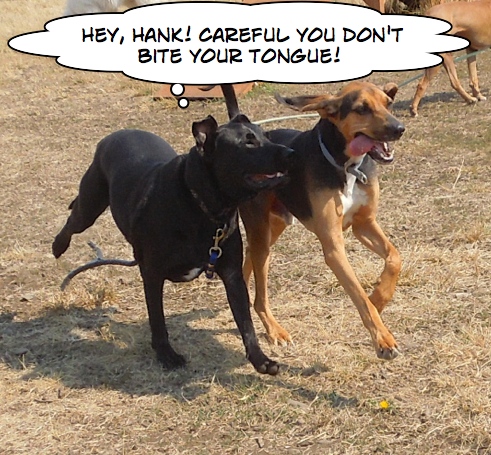 Meanwhile, in the mellow yard, Curly decided to take matters into his own paws.

Brutis is eleven months old, still very much a big puppy, but he was happy to act like  a helpful big brother to staff member Jessi’s new puppy. He explained lots of stuff! 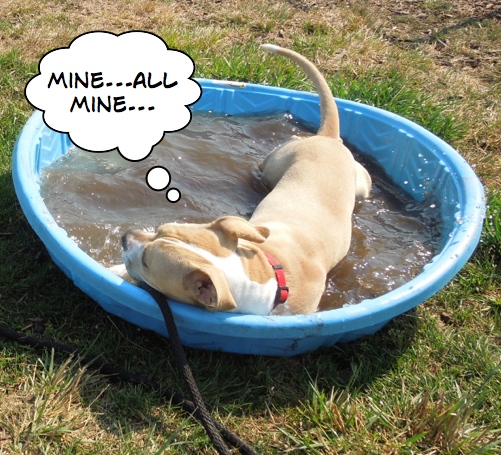 Yetti didn’t say much, but certainly enjoyed just standing in the water.

Brutis got tired of waiting for Yetti to share.

I’m was found as a stray…but I found out I’m very popular!

There was quite a stir around WHS when Yetti arrived, brought to us by the Independence Police Department where he had been staying after being picked up wandering. It’s not every day that we get a Great Pyrenees mix at the shelter. We think he’s about two years old. When no one claimed him, he became adoptable. Within hours he had multiple holds on him. There is not a sweeter dog on the planet. Here he and I were last Sunday. He’ll be going to his new home after he is neutered.

If you look up Bichon Frise dogs, here’s one description you’ll find: “Happy, charming and independent, the Bichon Frise is an engaging companion.” (https://dogtime.com) And that pretty much sums up Casey who is five years old. He is active, to be sure, as I found out watching him dash around the yard in play group. What I didn’t realize until he spent some time with Marianne was that he loves a good joke. 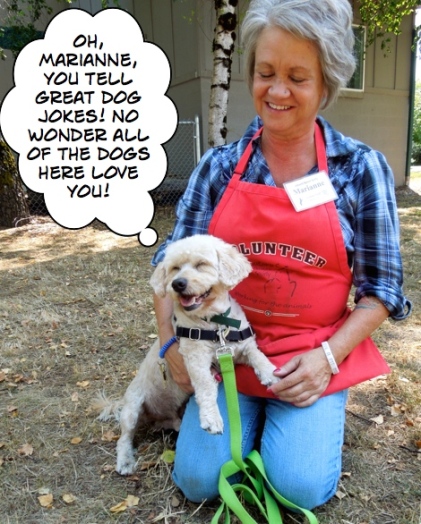 Okay, all you lovers of Hounds! Come on down to the shelter and take me home!

Yep, we have another Hound looking for a new family. Meet Hank, a three-year-old who enjoys following his nose. Because of his love of adventure, he’ll need a six-foot fence (at least). He has a good history with kids and as long as you don’t mind him being a little “chatty” when he’s excited about life, you’ll thoroughly enjoy his company. Here he was with Caroline on Sunday.

Looking for an active, happy, boisterous little dog? That’s ME!

Getting Carter to stay still for a nanosecond for a picture was not easy! This character is on the move all the time. Francis, however, discovered that Carter does like to be in someone’s arms and so I was able to get this shot. Carter is a one-year-old Australian Terrier mix from California. He’s decided he likes Oregon and is ready for a new home here. I think he’ll get one soon!

Never had a dog before? Need one who will teach you how to be a good dog family? Well, here I am!

This is Sadie, a five-year-old Border Collie/Lab mix. She would be a great first dog for a family, as she is about as easy-going as can be. She is house-trained and crate-trained. She gets along with all ages of children and other mellow dogs (she had a great time with the calm dogs in play group on Sunday.). She loves long walks and could use them often so she could get back her trim figure she wishes she still had! And at the end of the day, she’d enjoy some belly rubs as she sits next to your feet. Yep, she’s pretty much the perfect dog with the only exception being she can’t live with cats. She never has liked them and never will, thank you very much! 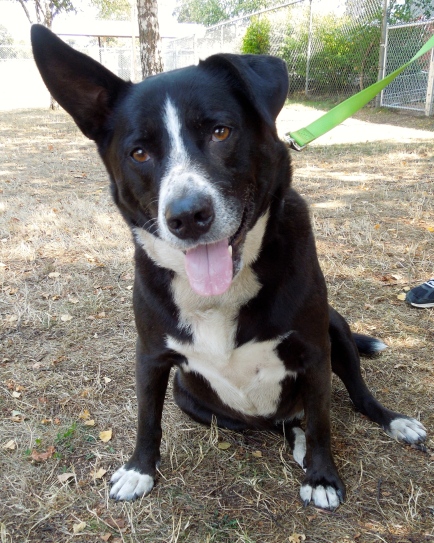 She had some relaxing time with Marianne on Sunday. 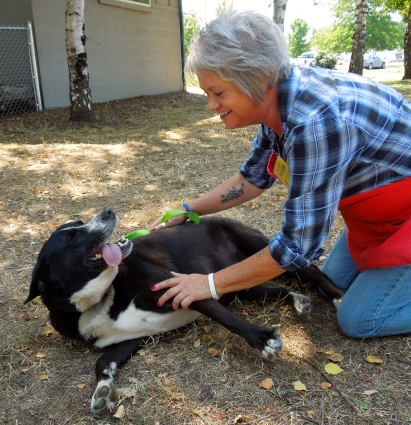 I’m perky. That’s what they say! Looking for a perky dog?

You can’t not smile when you are greeted by Truffles, a three-year-old Manchester/Jack Russell Terrier mix. This little guy smiles on command! He loved my hot dog bits and didn’t mind my camera. He does well with children, however he is sensitive about his feet being handled, so should go home with older dog-savvy kids. He enjoyed playing with other small dogs during play group. Truffles is affectionate, smart and active. He’ll make a great little buddy. Bruce really liked him! 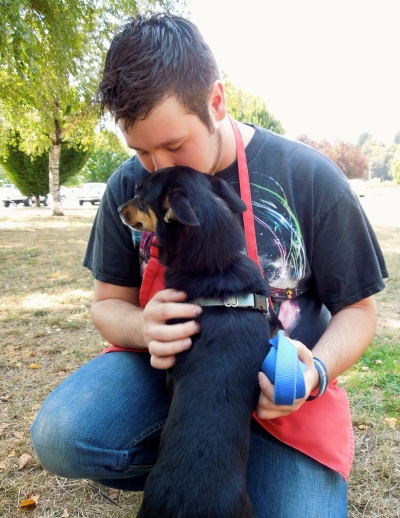 Here Truffles is with Caroline, another fan of his. See, still smiling!

Nope, you’re not seeing double! Casey and I look a lot alike!

Casey and Vincent are buddies, but they aren’t the same breed. Vincent is a Miniature Poodle mix. He is a lively, happy little guy ready for adventures and learning new things. He’d be an excellent candidate for our WHS training classes. Since he came from California with the S.T.A.R.T. team, we don’t know his history, but we do know that he loves being with people. Here he is with Jolene.

Remember Pearla from last week? Well, she’s still waiting for her forever people. As you can see, she still loves her tennis ball! In fact, during play group, she spent most of her time keeping an eye peeled for any stray tennis balls that might be hidden in the grass. Pearla is a seven-year-old German Shepherd mix and will make some family a wonderful new companion, just make sure to have tennis balls handy! Here she is having just played fetch with Bruce on Sunday. 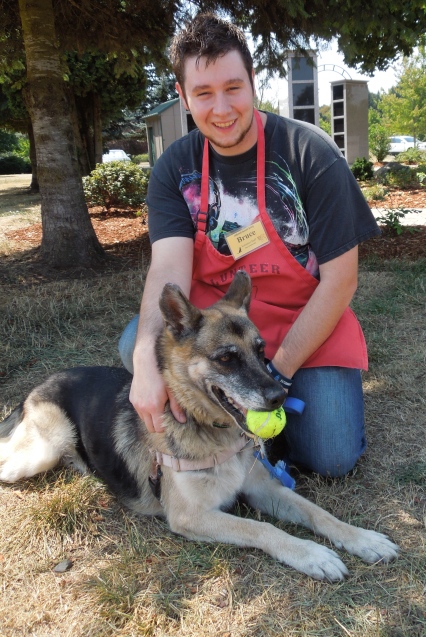 My best friend got adopted, but I’m still waiting for you!

Curly came in with another dog who was adopted quickly. He is hoping that his turn will come very soon. He is about ten years old, though he certainly doesn’t act it. We think he’s a Spaniel mix. He gets along great with other dogs and kids. He’s eager, active, and affectionate. He had a great time in play group and enjoyed hanging out with Caroline. I’m hoping his wait for a new home will be over soon.

Marianne and Martha say I’m a great young dog and a family will be lucky to adopt me. I think they’re right ’cause they know stuff!

Brutis is a wonderfully happy Pit Bull Terrier youngster, as you saw in the play group pictures. At eleven months old, he still exhibits some puppy characteristics so will need a patient family to help him polish his house-training skills and review what is to be chewed and what is to be left alone. This boy is eager to please and would be a great student in a WHS training class where he could learn the skills he’ll need to be the perfect adult. Brutis loves people and other dogs. His rowdy play style might be annoying to some older dogs, so he should meet any new family members he’ll be living with. This boy will become such a terrific ambassador for his breed with the right positive training. He’s such a good boy! 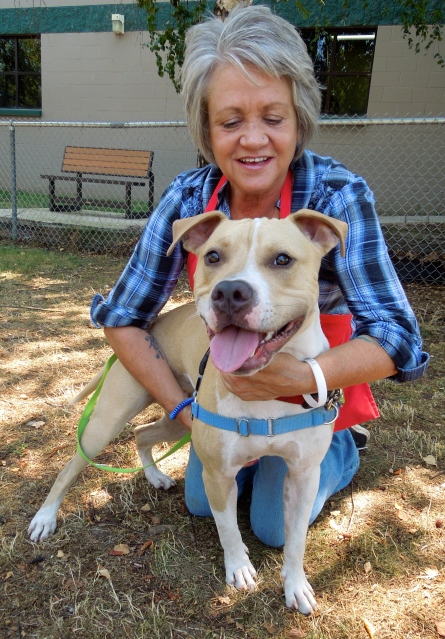 Yep, I’m another Hound dog! And I LOVE to sing!

A newbie whom I met for the first time today is Baldrick, an eight-year-old Hound mix who is such a fun character and who had Marianne, Caitlin, and me in stitches while I tried to take pictures of him for the WHS website. The boy LOVES to sing. I finally got this one. 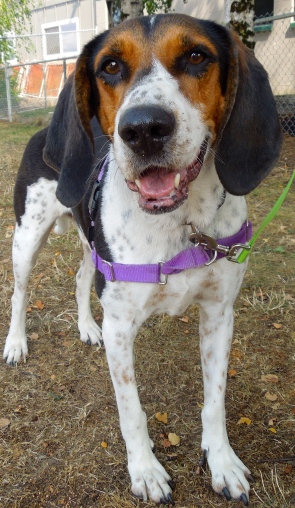 Then we all decided to just have some Hound fun. 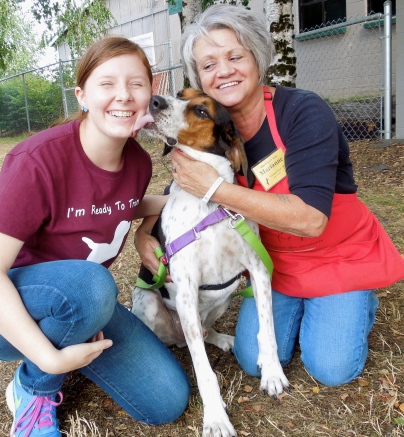 How could we all not chime in and have a song fest? Baldrick LOVED every minute and we all had such a fun time!

Of course I can’t write a post without talking about one of my all-time favorites, Destiny. We are hoping for the perfect home for this girl who has had a rough start to life. Destiny is a three-year-old Pit Bull Terrier mix who came to us as a S.T.A.R.T. dog last December. She has been adopted twice. The first time it was quickly discovered that she cannot live with cats. She finds them too tempting to chase. Destiny is looking for a family who will become her forever people. She rides great in my car, calmly looking out the window or lying down. She will need a patient family who will help her with house training, as she needs consistency. I’m hoping that she won’t have to stay at the shelter too long before finally finding her right fit of a family. Here she is with Bruce on Sunday.

Our Wednesday dog-walking team had to say good-bye to a loyal and dedicated walker today. Debbie is moving out of state and today was her last day at WHS. While we will all miss her, Rockie may miss her the most. Rocky is a four-year-old Lab mix who has been at WHS since early May. Debbie fell in love with him and each week would spend time with the big boy. Here are some of my favorite pictures of the two of them. 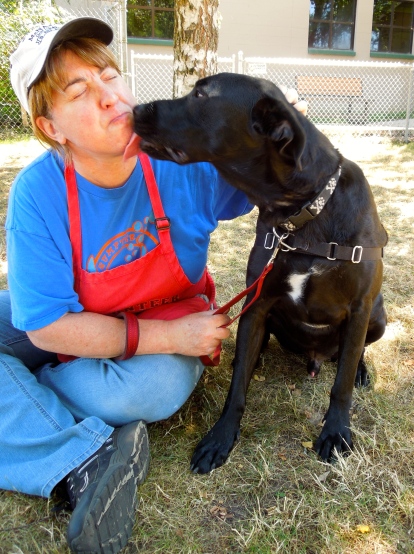 We were thrilled when Chevy and his new mom stopped in at WHS to say hi. As you can see, they are bonding well and she is totally in love with our boy. Such a lucky dog finally! 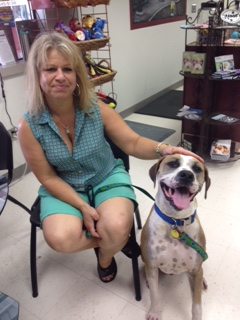 I was so happy when I got a message from Scrappy’s family that they had adopted newbie Gryffindor. He was adopted so fast, I didn’t get him posted in my blog. But here is the picture I took that I had planned to use. 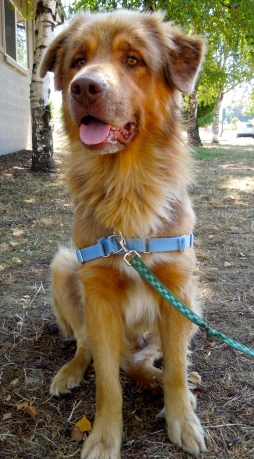 And here are the new brothers at home.

Last night the family sent me this one of Gryffin, as he is now called. Too bad he can’t totally relax!

They found out yesterday what happens during a thunder storm…into mom’s lap he jumps! 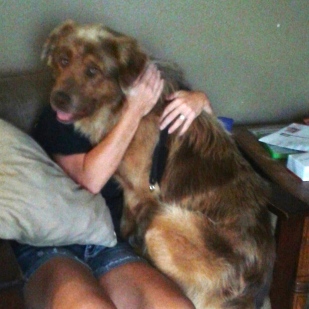 And that’s it for this week!