I have one of the BEST EVER happily-ever-after adoption stories to tell you!

Last week I featured and made a movie about Kia, our huge, gentle lap dog who had been waiting for her new family since June 28.

I wrote that she LOVED the GFB (Giant Fluff Ball) that Marianne and I introduced her to, and that I had promised her that one would go home with her when she was adopted. Little did we think that her forever family would fall in love with her through her video and drive down from Washington to adopt her on Saturday! Marianne had taken the GFB home to wash it, and so Kia had to leave for her new home without one.

BUT! A promise is a promise and so I contacted the family and asked if I could send a brand-new GFB to them. This was the wonderful response I got on Monday:

“Hi Martha, thank you so much for reaching out to us. I’m sure she would be thrilled to have a fluff ball! We would greatly appreciate it! She is doing great! And oh my goodness, we just adore her!!!😍🐶😍 We did end up changing her name to Gertie (Gertrude), so we are working in teaching her that lol. She’s already gone for a few rides in the truck/car, and loved it! We took her to the river, and she played around in the water with the kids. I got her a giant tennis ball, which she ever-so-sweetly brings to me, when she wants to play fetch for a bit. We are taking her to the groomer today, to get a bath, nails trimmed, etc. Then next is getting her into the vet. We are hoping to help her lose a little weight, with diet/light exercise, so hopefully it can help her arthritis a bit. But we are so, SO happy we found this sweetheart, and brought her home to be a part of our family. It already feels like we’ve had her forever!😍 Also I wanted to let you know that it was her video that actually helped us make the decision to make the 2.5-hour drive to come get her. We had been looking at dogs for a while, and had actually seen her picture. We of course loved her bio. But after combing through other possible candidates for our forever pooch, we stumbled across her again, and watched the video. After that, we all knew that she belonged with us. Thank you to all of you, especially Sasha, Melinda, and Oz, for all the work they did, to connect her with us. The whole experience (our first time ever adopting) has been AMAZING!💓 Also thank you all, for everything that you do, for these sweet souls. You are all truly angels!❤”

Kia, now Gertie, won the jackpot of families! And—Gertie’s GFB has been mailed! 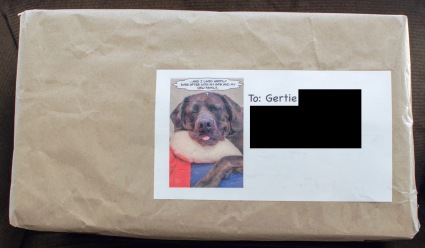 We’ve been promised an update when Gertie’s GFB arrives at her home. Can’t wait!

I may be eight, but I have energy! Need an Energizer Dog? Pick ME!

Sparky is an eight-year-old Rat Terrier mix. At 24 pounds, he’s a perfect medium-sized dog. Sparky has a good history with kids and is rated for children five and up. Sparky will need to be an only pet in an active home. He walks well on leash and is house-trained. He is somewhat of an escape artist, so will need to be watched around doors so that he doesn’t slip out to go on an adventure of his own. Sparky is not a lap dog, it’s too much fun to play! Sparky LOVES to chase after toys. He’s not picky about his toys—as you’ll see in his movie, he will play with anything and invent his own games. He kept us laughing in Mary’s Place on Sunday. We’re hoping this happy guy will soon be with his new forever family. 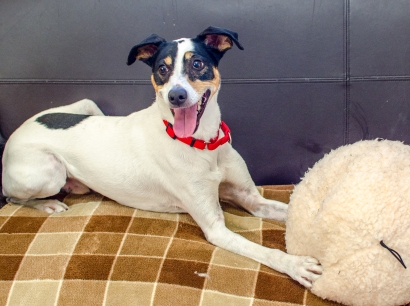 Watch this boy in ACTION!

On Tuesday several shelter dogs got to go on an Amazing Adventure to the Beach with our Behavior and Training staff and some volunteers. Sparky was one of the lucky dogs who went. Here are a few pictures. He had such a grand time and was such a good boy! 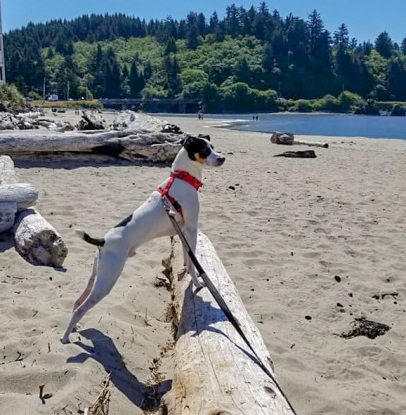 Sophie is a beautiful six-year-old Vizsla and Labrador mix. She arrived at WHS last August. She was adopted, but then returned in February. Since March she has been happily staying at volunteer/trainer Karla’s house, where she has been a star pupil, being taught manners and skills. She has learned a lot and has become such an easy dog to have around, Karla reports. On Sunday Karla and Sophie visited the shelter so that I could get some new pictures and video to make Sophie a movie. Here is how Karla explains what Sophie needs in her forever home.

“If you like taking care of a dog and helping them with their troubles, Sophie might be a great fit for you.

In many ways Sophie is easy. She’s house-trained, settles nicely, doesn’t destroy or even touch household items, trusts seemingly all people and she is mostly quiet. She makes me laugh with her lively, happy moments were she snorts, huffs and sneezes while prancing.

And here are your opportunities to help her: Sophie fears other canines and needs a life without dogs. Even if you don’t have a dog, some forethought and management will be required. To name two: you will need to ask for a backdoor entry when you go to the vet, and think about where she will stay if you travel. Sophie’s other significant fear is of loud noises—specifically thunder, fireworks and gun shots. Want the joy of helping Sophie learn to cope during noise events? It will require time, a bit of positive-based training knowledge, preparedness and some self-sacrifice. Ah, but to help give a dog a closer version of heaven on earth—priceless.”

We had such a great time in Mary’s Place with this gentle, affectionate dog. She loves everyone she meets. She is going to be such a wonderful member for the right family. 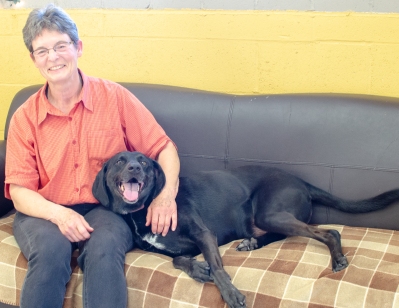 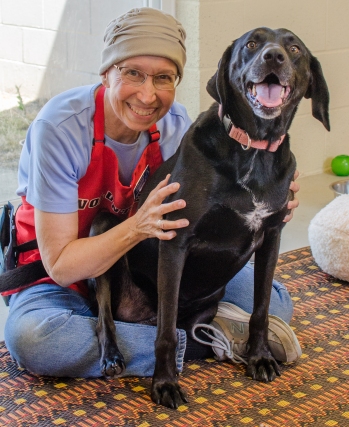 A Girl and Her Sandwich Part 2

If you are a regular reader of my blog, you already know Summer very well. Last week’s post included a series I called, “A Dog and Her Sandwich.” However, after the photo shoot, Summer chewed a little too much on the sandwich and it broke. We didn’t have the heart to tell her we had to throw it away. This week when Summer arrived at Mary’s Place for some fun, she came not with her sandwich, but with a hamburger!

In case you are a first-time blog reader and don’t know Summer, here are the facts. Summer is a four-year-old American Staffordshire Terrier mix. She came to us with a chronic ear infection which is now under control with medication, but it will need to be monitored and possibly treated for the rest of her life. She can be picky about her dog friends, so will need to meet any dog she goes home with. She also is nervous around children, so older teenagers, fifteen and up, would be perfect for her. Oh yes, and no cats! They are just too easy to chase. But, oh, what a sweet dog Summer is! 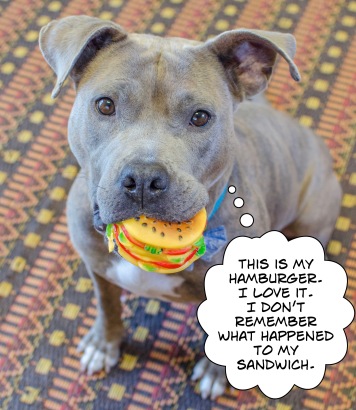 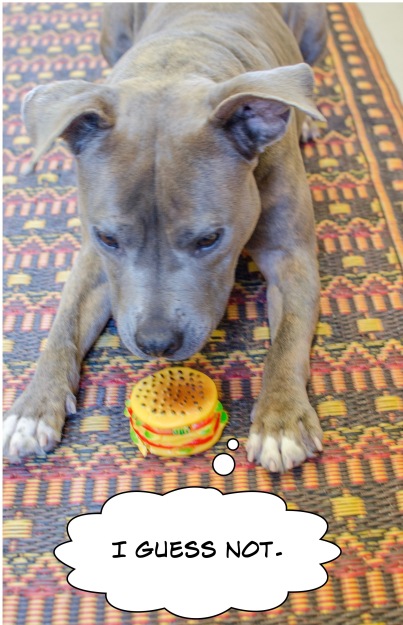 Summer also go to go on the Amazing Adventure to the Beach. She also got an excellent behavior report and had a blast. Don’t you wish you knew what she was thinking? 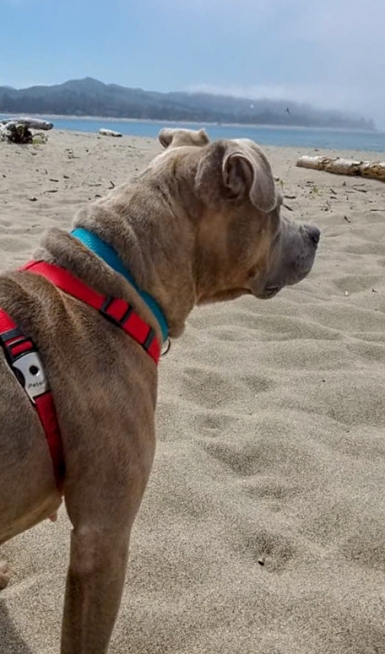 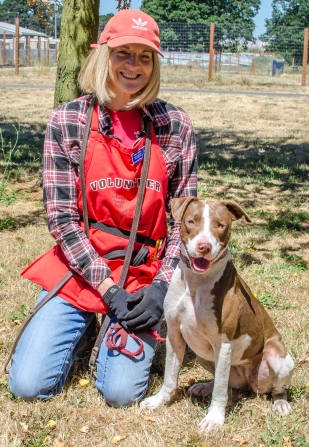 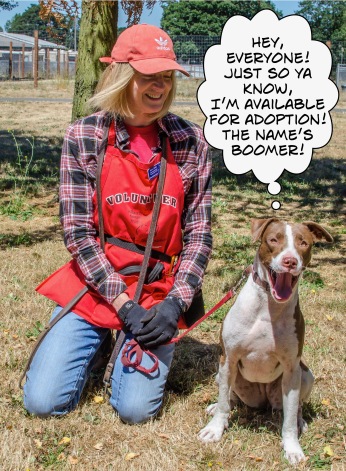 This is Bernie, a four-year-old American Staffordshire Terrier mix enjoying time with Marianne. 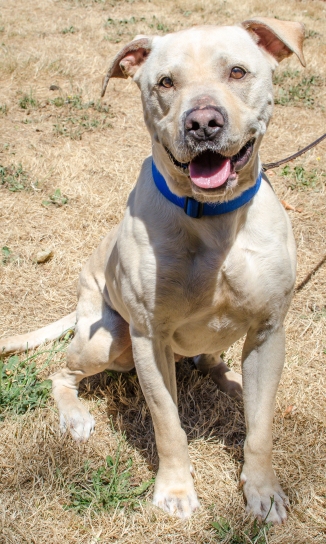 Sheldon enjoyed some outside time with Francis on Sunday. Sheldon is a five-year-old Shepherd mix. 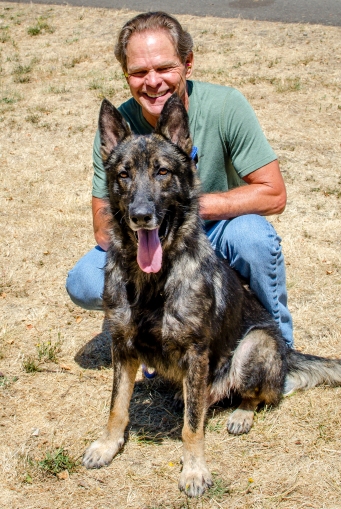 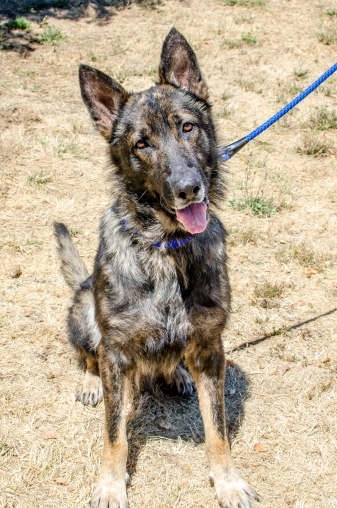 Baloo is a two-year-old Black-Mouth Cur mix, here with Jenna. 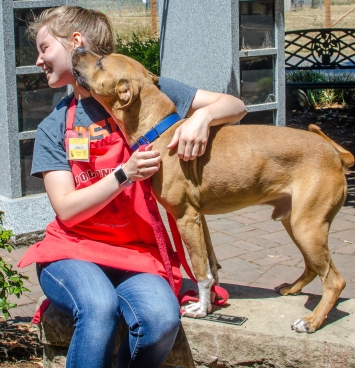 This is Rosita, a three-year-old mixed breed dog, with Christine. 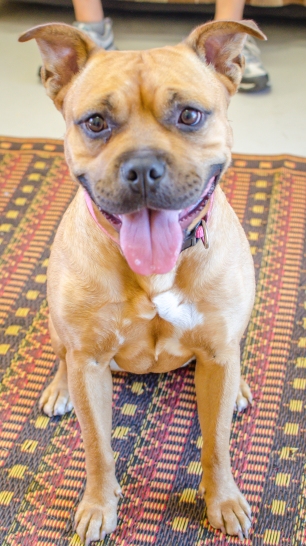 Joan and Steve were long-time volunteer WHS dog walkers who have adopted three dogs from our shelter over the years. Amber (Lemon) was the first and now they have Sadie and Rudy. All three have been very lucky dogs to have found a home with these loving owners.

Last Sunday I arrived at WHS just as public play group was ending. I was thrilled to see Joan and Steve with Sadie and Rudy who had had a wonderful time romping with the other dogs. I snapped this picture as they were about to head home.

Of course I asked for an update and pictures. Here is their update.

“We adopted Sadie (formerly known as Kiwi) and Rudy in February after our beloved adoptee, Amber, died of kidney failure. The two have become inseparable buddies! They play and run together and make sure the other is always accounted for. Rudy is the boss and Sadie is happy to let him believe in his fantasy position!

Sadie, a Border Collie mix, wants to keep everyone in her line of vision. When one of us is upstairs and one down, she rests on the landing to keep track of us. She runs like the wind and always strives to be in front of the pack. If Rudy has to be on leash, she runs back and forth just to taunt him!

She is, however, persnickety about her food. The other day, I put a spoon full of minestrone on her dry food instead of the usual spoonful of canned food. She rushed over to eat, put her nose in the bowl, sat on her haunches and gave me the Border Collie stare! She would have none of it until it was properly prepared!

Rudy, a Hound mix, is very personable and wants to be the center of any attention given. He is a true ‘nose to the ground’ hound! Our forested property can keep him busy for hours. Sometimes he stops, puts his nose straight up in the air and sniffs and sniffs. Squirrels beware!

Rudy also barks and bays like a hound! He barks at forest creatures, he barks to play and he barks to let everyone know he has arrived! Usually, at WHS playgroup he barks when we park. This week, he spied the play area from Turner Road. Let me just say, they knew he was there!” 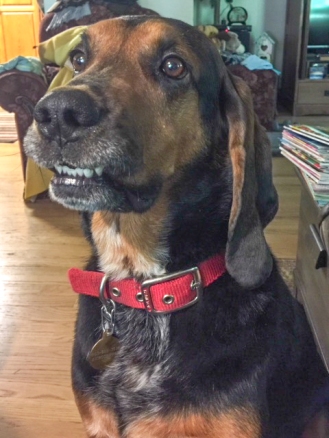 And on that happy note, that’s it for this week!