It’s good to be back! This week’s post will be a potpourri, as I catch up on a lot of shelter news after being gone for two weeks.

First of all, the WHS annual Bowser’s Boo Bash (the biggest shelter fundraiser each year) was Saturday evening. As always, it was wonderful and a total of $125,000 was raised for our dogs and cats! Here are a few shots I took of some of the attendees: people, adoptable pups, and alum dogs. 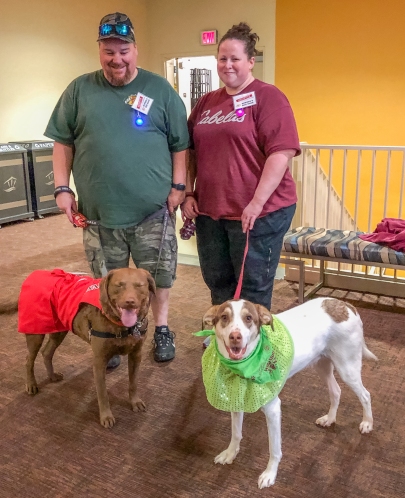 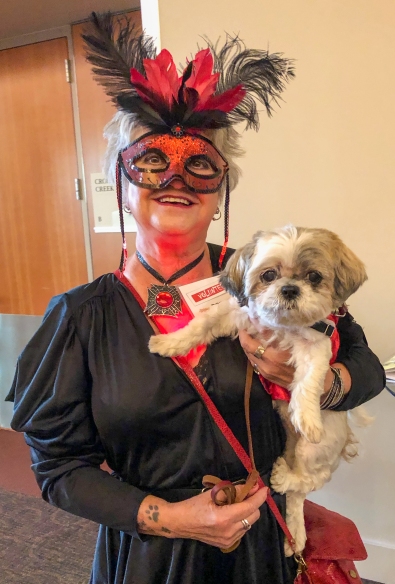 It was great to be back with my “shelter peeps” and meet new dogs on Sunday. But before I talk about this week’s adoptable dogs, I want you to meet three adorable kittens who are available. When one volunteers for as long as Marianne, Ayla, and I have at WHS, I guess it’s inevitable that at some point the staff runs out of ideas for names during kitten season and decides to name a kitten after you! Here are Marianne and Marianne, Martha and Martha, Ayla and Ayla who are all waiting for their forever families (the kittens, not the humans! :).

There were three very happy adoptions while I was at WHS on Sunday and I was lucky to get their going-home pictures. First was little Jake. While he was not thrilled with having to wear a cone, his new family was over the moon about taking him home.

As you know, we are always so excited when one of our senior dogs gets adopted. We are absolutely THRILLED when a BONDED PAIR of seniors gets adopted! Toto (16) and Missy (14) have been together their whole lives. They went home with a family who didn’t blink an eye when they decided to take TWO seniors home. 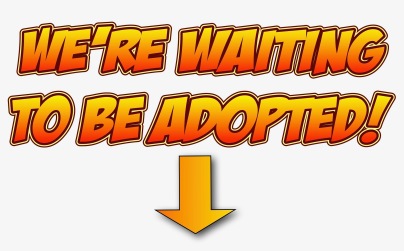 I became an instant favorite at the shelter when I arrived. I could be YOUR most favorite dog EVER!

Marianne couldn’t wait for me to meet Torque on Sunday afternoon. And when I did, I could see why. What a face!

Torque is an old soul in a youngster’s body. He is an eleven-month-old Bassett Hound mix couch potato with such an expressive face! Torque has a great history with other dogs and is enjoying our playgroups. He also has lived with a cat and wouldn’t mind having a younger cat sibling who would want to play with him. Torque also loves kids and because of his docile and affectionate personality, he is rated PG +5. His former person hopes he will go home with children. Torque was happy to pose for his photo shoot with Marianne, though he didn’t want to smile. 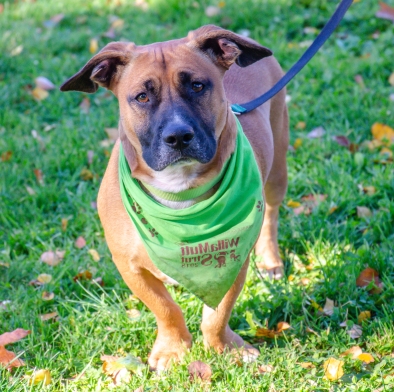 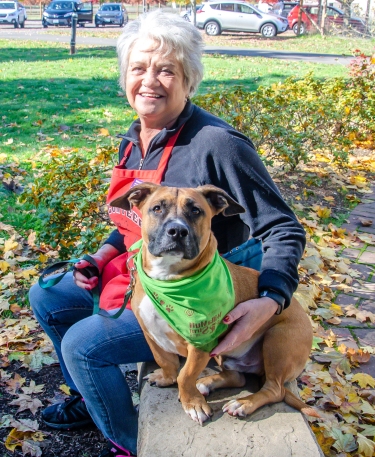 Torque’s former family reports that at home he is a lap dog who also loves his blanket and his bed. He enjoys car rides, toys, and just hanging out with his people. What doesn’t Torque like? He does not like to be yelled at (neither do I!), fireworks, or being left alone (he’s fine if he’s left with another dog). He is house-trained and is used to a dog door. He would be the happiest in a home with another dog, a cat, and kids. He can be uneasy in new situations and with new people, and just needs a little time to feel comfortable. We decided to take him into Mary’s Place and see just how much of a couch potato/lap dog he is. We were not disappointed.

Torque wasn’t interested in playing with toys, but really enjoyed attention while relaxing on the couch with Megan and Marianne. 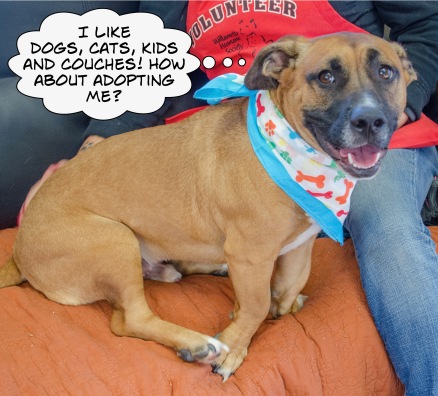 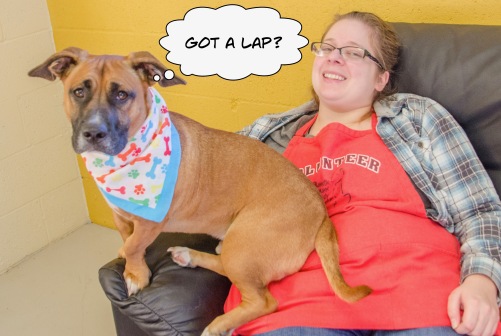 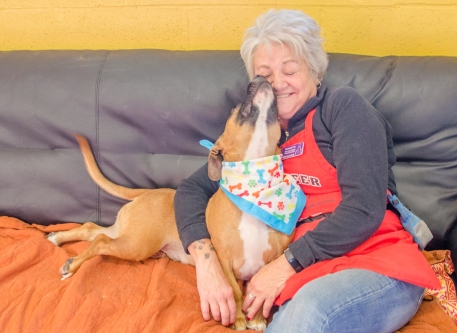 Yep, I’m still here waiting for the perfect person for me! Could it be you?

I’ve written about Swayze several times, but still he waits for his right fit of a family. Swayze is a ten-month-old pup, looking for a puppy-savvy family who has the time, energy and patience, using positive reward-based training, to continue to teach Swayze the skills he needs. The reward for this endeavor will be huge because this boy is so worth the effort! In full disclosure, Swayze has been adopted and returned four times. But he knows his perfect home is out there, we just need to find it!

Swayze came to us on June 3rd, a transfer from an over-crowded California shelter, where he had not received any training. After being returned several times, Swayze is now enrolled in our behavior training program, as well as working with volunteer trainers. He is hoping—in fact, all of his many fans at the shelter are hoping—that the fifth time will be the perfect fit.

Because of his youthful enthusiasm, Swayze can be jumpy, so is recommended for kids thirteen and older. He also will need to be an only pet. So for a family with older kids who believes in positive, rewards-based training who wish they had an exuberant, friendly pup to teach, here he is. And since he LOVES treats (especially cheese bits), this guy will be an eager and fast learner. With some time and effort, Swayze will grow up to be a wonderful family companion. Swayze is being shown by our training department. Please submit your adoption questionnaire and allow them to contact you for an appointment to meet him. You can fill out an application here.

With being at the shelter for so long, Swayze is getting stressed. We took him out to the big yard for some fun fetch time. He loved it and did so well. He waits for you to throw the ball and returns it, dropping it at your feet when asked. He is such a happy boy when he’s outside playing.

There are times when he gets ahead of himself. 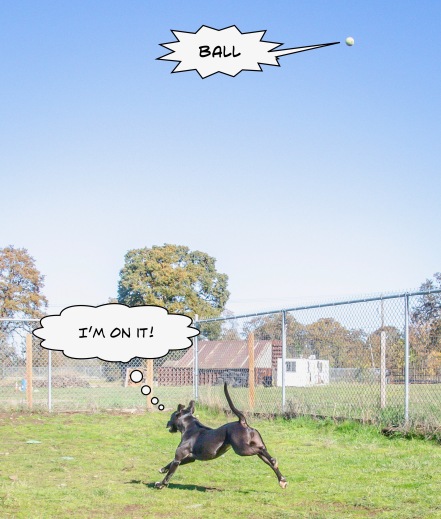 Even Swayze gets tired after a vigorous fetch game. 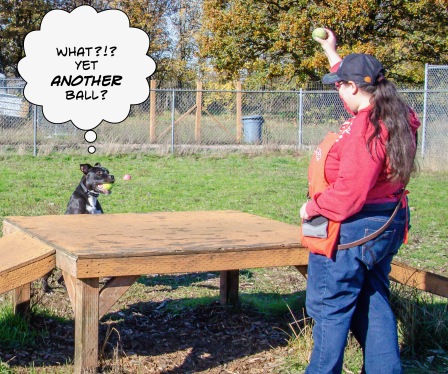 He was happy to take a rest with Megan and Ayla. 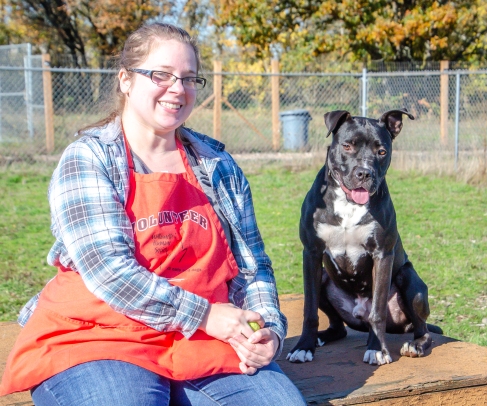 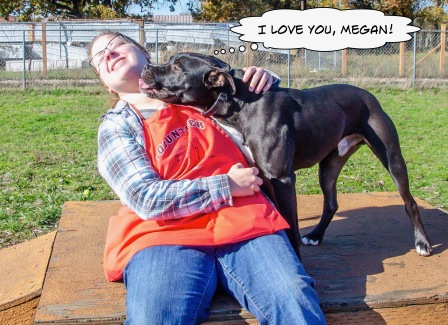 Later we took him into Mary’s Place to relax a while before taking him back to his kennel.

We are so hoping that Swayze won’t have to wait much longer for his perfect family.

I’m new here and a little nervous. I hope I find a home very soon. I won’t be much trouble.

Meet Rita, a Terrier mix who is as cute as she can be. 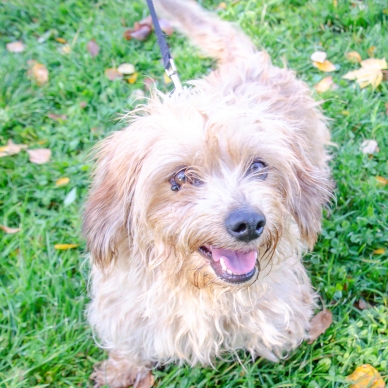 She was found as a stray, so we don’t know anything about her, but she was excited about her photo shoot and couldn’t have been more cooperative with Ayla and me. We guess her age at about five years old. She will need some dental work down the road, but otherwise seems very healthy. 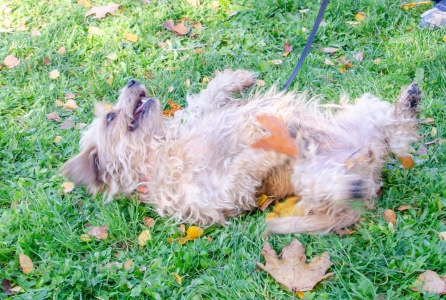 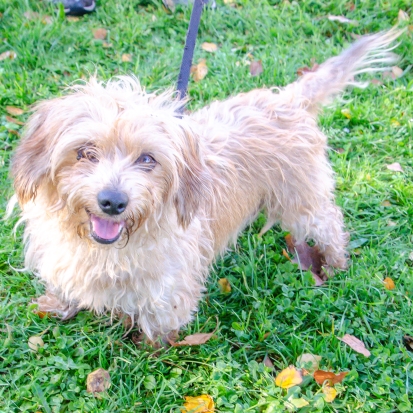 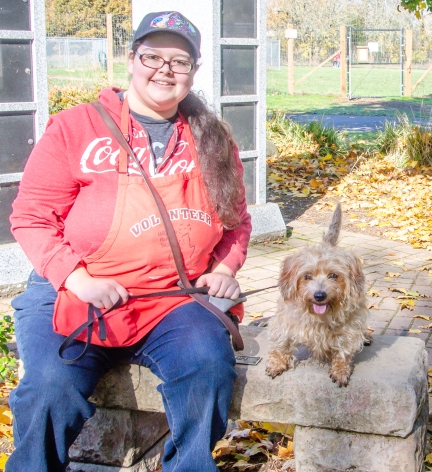 I have a feeling she won’t have to wait long for a new home. 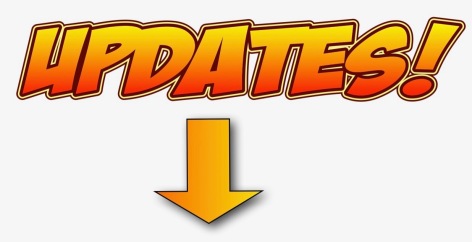 We have THREE terrific updates this week!

His new family came to meet him after reading my blog post about him, brought their dog, Gunner (WHS alumnus), for a dog meet. The meet went well and Thor was adopted. Here is a combination of two updates they have sent.

“Thor has settled right in. He has had no problem with our three cats. One of them actually comes up and rubs against him!  His bed is in my daughter’s room, and boy, did he love it the first night. I actually had to go get him out of bed the next morning to take him outside!! He and Gunner are great together. They both like to lie around. He has adjusted to our family so well!!! Gunner, I think, is actually helping him with some of his issues (being scared of some noises for example). Thor goes on a walk every morning with Gunner. The first couple times weren’t very good. He was quite afraid. Now he’s like a totally different dog!! He doesn’t really like car rides. But again, he really watches Gunner, who loves car rides. We took them both down to the Mudbay pet store, and everyone there loved Thor!! He had his first vet appointment and again everyone fell in love with him. We are very happy we could give this boy a forever home!! Here are some pictures.” 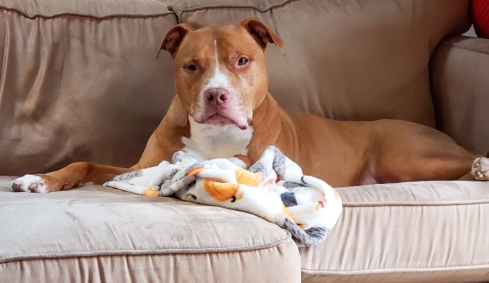 Could Thor BE any more relaxed? 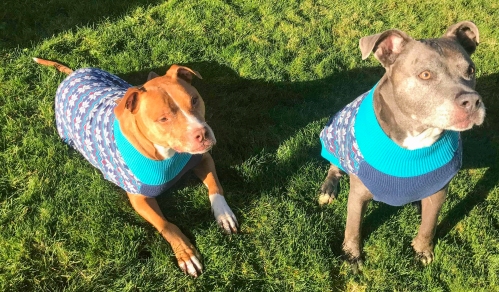 Cooper arrived as a stray last December. He was a friendly, goofy boy and we were very happy when he was adopted quickly. 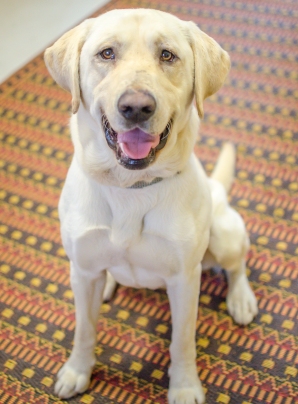 Last week his family sent me an update and I had a delightful surprise on Sunday when Cooper’s family brought him to WHS for a visit. Such a lucky dog! 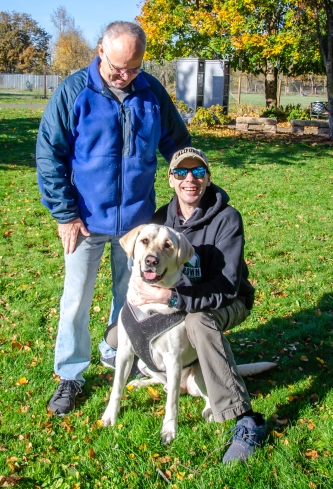 “We adopted Cooper in mid-December of last year, shortly after we lost our dear 14-year-old Ashley (Australian Shepherd/German Shepherd mix). Her big brother Jax, who is a four-year-old Doberman/German Shepherd, was definitely feeling lonely and missing her. When we first visited Cooper at the Humane Society along with Jax, they were instant best buds and started playing together right away, which was amazing because Jax is usually very dog-selective about who he accepts into his pack. Since then, they have bonded to the point of being inseparable! Cooper has boundless energy and he really keeps Jax going, especially when they are getting into trouble and having adventures in our back yard. We really enjoy bringing him back to see his old pals at Willamette Humane Society and it’s awesome to see him so loved and treated as a favorite visitor. We hope to continue bringing him back to see everyone, for many years to come.” 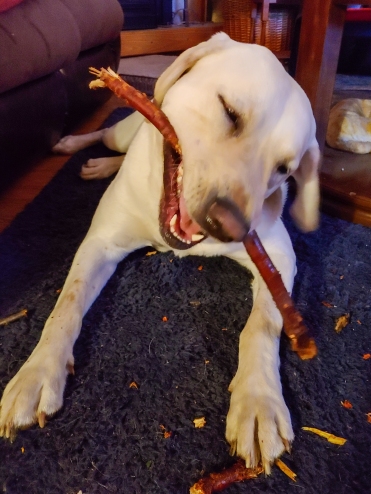 One of Megan’s all-time favorite dogs is Leo. This ten-month-old Great Dane mix puppy is absolutely hilarious. We loved spending time with him, especially in Mary’s Place. Leo was adopted once, but had to be returned when the adopter’s job changed and she had to travel a lot. 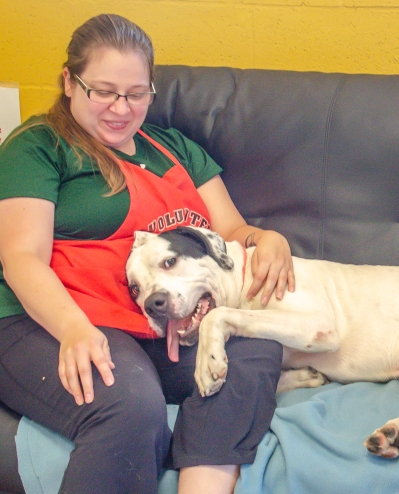 Megan has missed this giant couch potato/snuggle bug and will be thrilled to see this update!

“Randall and I came in so many times in search for the perfect addition to our home. I, of course, fell in love with all the dogs at the shelter, but Yugo (previously Leo) was the one that stole both our hearts. We were actually at the shelter when he was being brought back and I remember telling Randall, “Why would someone return such a good dog? He just seems like a happy boy.” The next day we came back to remove the hold on the dog we had looked at and decided to adopt Yugo!

He has been the greatest addition to our home. He is the best snuggler and will snuggle ALL DAY LONG. (In fact, he is curled up next to me as I write this email). His tail is constantly wagging… or thudding the bed… or wacking the wall… because he is just so darn happy. And, he is the stereotypical little brother personality to Rocky (another WHS rescue). He will lie on top of him, can’t stand if he is close to him and can’t give Rocky love nibbles, and just straight up begs for Rocky’s attention.”

I laughed out loud when I saw this picture! Poor Rocky!

On these happy updates, that’s it for this week!