This week I’m going to tell you about two happy-go-lucky dogs, both with great senses of humor. Last Sunday they kept us laughing with their antics. To them, the treat jar is always half full and spending time with people is the best thing EVER. Marianne, Megan, Ayla, and I had such a terrific time hanging out with each of them.

I’ve been here before, so I know the ropes. I can’t wait to meet my new family soon!

Chico is a six-year-old Shepherd mix who first arrived at WHS in January of 2018 when his family was moving. He was adopted in February, but came back to us recently, once again due to his family moving. He is really hoping that his next home will be his forever one. Chico weighs in at 54 pounds and has allergies which caused him to lose some of his coat. However, a good diet and some meds have done wonders and he’s looking and feeling much better. His allergies will need to be something his new family keeps on top of.

We decided to first take Chico out to a yard. His favorite thing to do in the whole world is play fetch, so play, we did! 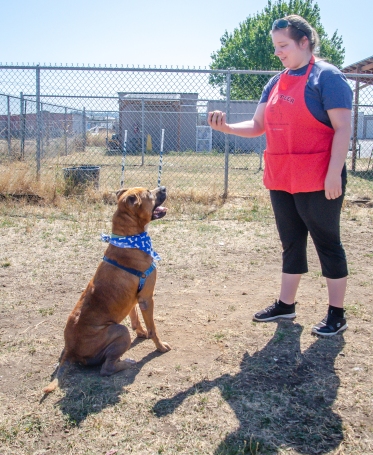 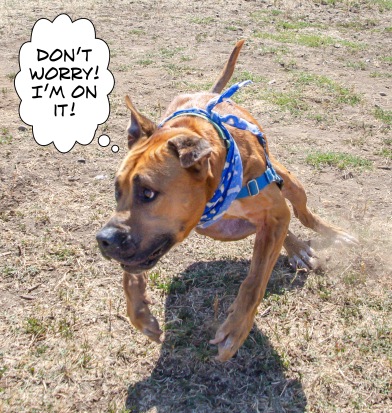 Chico is very good about bringing the ball back to you and dropping it to be thrown again. After a vigorous game of fetch, we settled in for some blanket time. That’s when his sense of humor showed up.

He thinks his jokes are much funnier than we do. 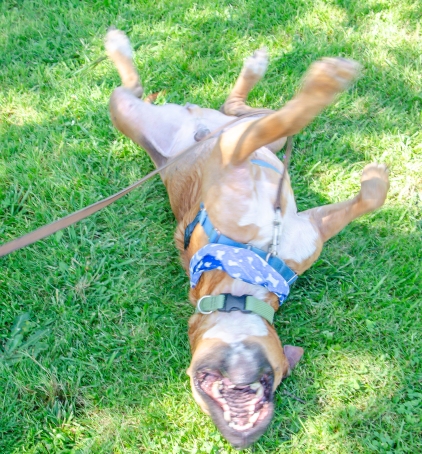 After joke time, we took a treat break. 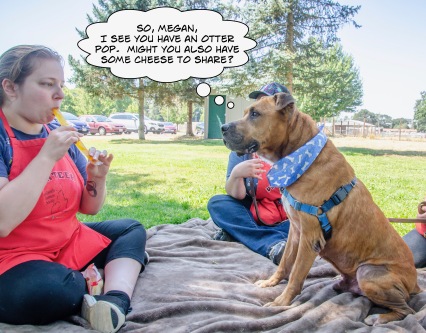 Chico will need a cat-free home. They are just too much fun to chase. He is rated for kids ten and up due to his size and enthusiasm. Chico loves everybody and has never met a stranger he didn’t like immediately. He can be a bit picky about his canine friends, so will need to meet any he would be living with and they need to be about his size. He is both house- and crate-trained. 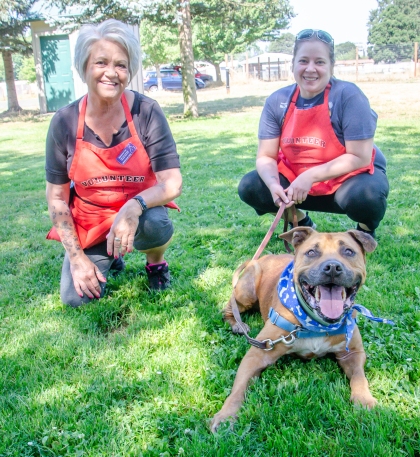 Chico hasn’t had a lot of stability in his six years. He’s really hoping that a new family will find him and he’ll never be homeless again. He will be a loyal, entertaining, and loving best friend.

If you adopt me, I promise I will keep you laughing!

Carmen is a two-year-old American Staffordshire Terrier mix. She is a beauty! 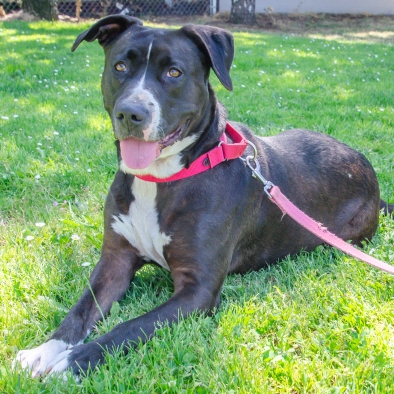 Carmen is an absolutely delightful young dog. She is polite, walks well on leash, knows some commands, is house-trained and very affectionate. She is rated for children about eight and above. She has a great time in our playgroups and is happy to romp with other dogs.

Carmen is not a huge ball-fetching kind of girl, as we found out when we took her out to a yard. She didn’t care to chase silly tennis balls, but she would come running to us when we called her.

What Carmen really likes to do is relax with her peeps. 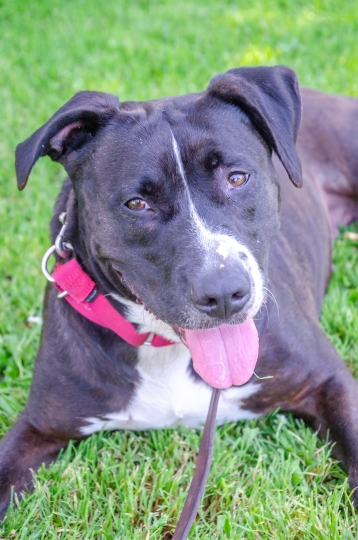 Since it was getting pretty hot outside, we took Carmen into Mary’s Place to hang out for a while. She loved it and had no trouble keeping us laughing. We introduced her to a Giant Fluff Ball and she was entranced. She kept going around the room showing it to each of us.

Then she settled on the couch.

We suddenly noticed that Carmen was sitting on the couch just like a human! She wasn’t sure what we were laughing about, but decided to join in. 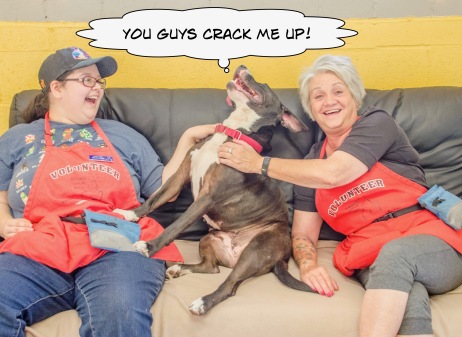 After all of the joking around, this happened.

Carmen is going to be an ideal companion for some lucky family. We’re all hoping they will find her soon.

Got kids? I love kids!

I hadn’t planned to include Sasha in this post. After meeting her on Sunday, I was sure she would be adopted by the end of the day, or at the latest on Monday. However, she is still at the shelter to my amazement, though she does have one hold. Sasha is a two-year-old German Shepherd mix. She was surrendered because her family had to move to a smaller place and she was just too big. Weighing in at 73 pounds, she is no small pup. But her family obviously loved her very much, as she is such a gentle, affectionate, and well-trained dog. 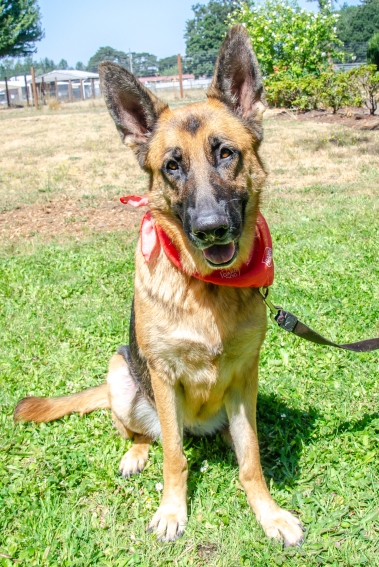 So what makes me so sure she’ll not be at the shelter long? Well, this girl is rated PG 5+! She has lived with young kids and adores them. Her former family hopes that she will go home with kids, as “she watches over kids, is friendly, playful, gentle and adores them.” Sasha has also lived happily with two cats and another dog. She walks well on leash and loves to play with other canines. She enjoys trail hikes, though will chase rabbits and squirrels if given the chance. Oh, and she does like to be in the front seat when riding in a car. Sasha loves ear scratches and belly rubs, is house- and crate-trained, and likes to get attention from strangers. See why I was sure she’d be gone in a nanosecond?  We decided to spend some blanket time with her on Sunday, since I was sure it would be our only time to get to know her. She settled right in. Some family is going to be very lucky! 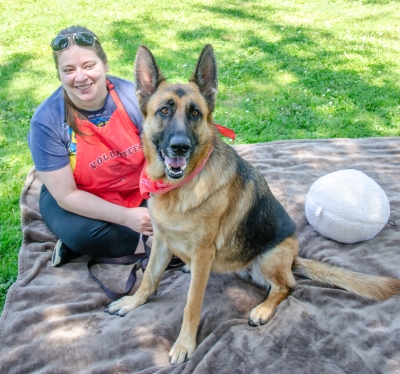 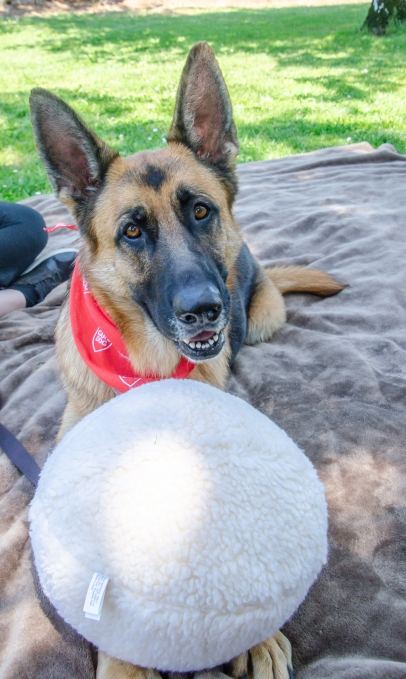 We have one terrific update this week.

Remember our sweet three-legged Zabrina who waited so long for her new family to find her?

I was so excited that I was at WHS when her family found her and I could take her going-home picture. 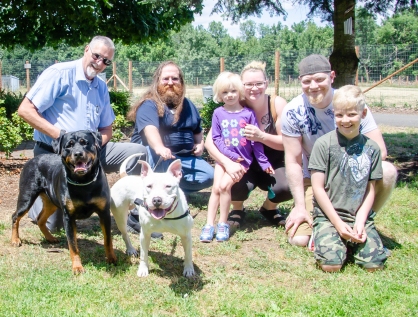 I was thrilled to get this update from her family last week.

“An update on Zabrina. She has settled in nicely. Our kitty isn’t too happy with her but no issues with them, really. Still working on the house training. She is just adored.”

And it looks like she has totally settled into her new home.