It was a busy week at Willamette Humane Society culminating in the annual Bowser’s Boo Bash fundraiser on Saturday evening. It was a sold-out affair and loads of fun for over 500 WHS supporters. I was thrilled to finally meet Steve Spiro and René Ruston, two of the three co-founders of the incredible S.T.A.R.T. organization which has transported so many wonderful dogs from overcrowded shelters in California to us and other rescues. They came to support WHS and to see where many of “their dogs” have landed on their way to forever homes. (Yes, I’m the purple crayon.)

I was also excited to see Jeremy and Mandy from Sevadog, a phenomenal rescue/training team which has successfully helped us with some of our dogs having  challenging issues. (Yep, purple crayon again.)

See this group of very happy people? What do they all have in common? They are  amazing animal rescuers who spent the evening supporting WHS.

As usual, I took a lot of pictures so you could see what a terrific evening we had. I’ll let you know how much money was raised next week.

We had 17 wonderful dog adoptions last week, of which nine were Blog Dogs. Here they are:

We got to go to Bowser’s Boo Bash!

Two of our shelter dogs, Sarah and Frankie, attended the Bash as well as the humans. Both were great sports and got lots of attention.

Sarah is a six-year-old Lab/German Shepherd mix, who has been waiting for a month for a new home. She loves people but is not fond of other dogs or cats, so she would do best as the only pet in the home. She weighs 84 pounds. We volunteers have become very fond of this older girl and hope she will be found by her forever family soon. Here she was at Bowser’s with volunteer Allison.

Frankie is a newbie who has quickly won the hearts of everyone he’s met. He’s a three-year-old Lab/Pug mix (seriously!). He is a gentle, friendly, guy and is house-trained. When we brought him to play group on Sunday, he was somewhat overwhelmed by the bigger, rough and rowdy characters, so we moved him to the calm/smaller dog side and he was very happy. Frankie did very well at Bowser’s with volunteer Ashtyn and was quite a little celebrity.

After all of the excitement on Saturday night, Franky settled down with Ian Sunday afternoon. We’re hoping this little guy gets a forever home very soon.

Yep, I have big ears and a big heart!

Jolene spent some time with Bella on Sunday afternoon. Bella is a five-year-old Dutch Shepherd mix. She is a happy girl with lots of energy so will do well in an active family. She has a good history with kids, but with her enthusiasm, she would do best with older children. Bella walks well on leash and took my treats politely. She would be a great candidate for training classes and a quick study. She is house-trained and spent some time in a foster home where she got along well with two other dogs. Bella will be a great family dog!

I got to go on a respite!

Nico, one of our long-termers, got to go for an adventure with volunteers Jill and Caitlin last week. Nico is an Australian Kelpie/Pit Bull Terrier mix. He is two years old and weighs about 50 pounds. He’s been at WHS since July. He’ll need a home with experienced owners with no cats. Nico loves people and is hoping just the right family will find him. Here are some pictures from his fun outing.

“Here are a few pictures I took of Nico and Caitlin on 10/24, when we took him on a short respite to a couple of parks. He was really good and I hope he enjoyed the walk. That sweet boy so deserves a home!” – Jill

I have a bit of a cold, but I’m getting better and you can still adopt me!

Volunteer Francis gave the dogs who are in the ISO kennels (because they are getting over colds) some time on Sunday. Here he is with Oden, a one-year-old pup who is full of excitement and love. Oden would make a great hiking or jogging partner. He is very treat-motivated and is a quick learner. He does very well with other dogs, but not with cats. He walks well on leash, loves car rides, and is house-trained. He’d love to come to training classes to learn more—like crate training, so he won’t chew on things he shouldn’t. Oden is a terrific young dog just waiting for his new family. I hope they come soon.

I was anxious to meet two newbies today and what a joy they both are! The first dog I spent time with was Blossom, a three-year-old Bulldog mix. I took her out to get pictures for the WHS website with Marianne’s help. We both instantly loved this big-headed girl, but try as I might, I couldn’t get her to smile.

So, after taking a slew of serious shots, we said good-bye to Marianne and headed out to spend some time in the big yard. She walks perfectly on leash, and as we went, I took a few more pictures just because.

But after about the third shot, I got this look.

Once in the yard, Blossom blossomed! What a difference a walk makes!

Blossom is such a great dog! Besides walking perfectly on leash, she is treat-motivated, but takes them gently, so she’ll be a great student as she learns new skills. This will be necessary, since at this point, Blossom knows nothing! We started working on “sit” this afternoon. But what a joy training this sweetheart will be!

Yep, I seem to be the perfect dog. Just ask Martha!

The second newbie I met was Lucy, a two-year-old Collie/Australian Shepherd mix. And yes, she does seem to be perfect. She walks politely on leash, takes treats gently, knows several commands, plays fetch, and gets along with other dogs. Here she is with Joan today.

I played fetch with her for a long time, but she would have continued for who knows how long. Not only did she return the ball to me, she dropped it at my feet. And if I didn’t pick it up right away, she would pick it up and drop it again to let me know it was there.

Besides “sit,” she also knows “down.” This beautiful dog will make a wonderful companion and I’m sure she will find her forever home very quickly!

He was adopted by Ashleigh, WHS Foster and Rescue Coordinator. I was so happy when she sent this update.

“It’s been a year since we adopted Tad from WHS – and we couldn’t be happier with him! We honestly do not understand how he landed himself in a shelter – other than being the average crazy Pointer.  It has been (and will continue) to be quite the adventure having Tad in our home but we wouldn’t have it any other way!”

“This summer, we spent a lot of time playing in the river. He has learned the joys of underwater diving. He literally puts his whole head under water to retrieve sticks and other things off the bottom. Always gives us a good laugh!”

“He is doing so well off leash! Such a smart, attentive boy. Of course this all goes out the window when we see those tweety birds :)”

“Kongs are one of his (and my) favorite toys. Right now, we are stuffing them with pumpkin and peanut butter! Goodness, he loves them!”

“We also took Tad on his first pheasant hunt. First time out, and he got a bird! So, don’t let anyone tell you that you can’t teach an old dog a new trick. So proud of our boy.”

“And last… He was really unsure about these big orange things we brought into the home. Haha :)”
Bryce & Ashleigh

Girly Girl arrived at WHS last August in pretty rough shape. Her nails were overgrown and she had a dirty coat with lots of tangled mats. Here’s how she looked then. I remember feeling very sorry for her. I was so happy when she was adopted in just a few days of arriving.

Last week I got this update on Girly Girl. What a difference love makes!

“I adopted Girly Girl (now called GiGi) on August 17th.  She is a Toy Poodle/Terrier mix and was an owner relinquish.  She was a mess when I brought her home.  At 4 years old, she had just been spayed, lost two teeth in the dental cleaning, and her hair and skin needed TLC. Her vet exam the first week she was home revealed a probably collapsing trachea and a luxating right rear patella.  She responded well to treatment. I spent hours brushing and cutting out mats.  She was already so bonded with me.  In fact, everyone in my apartment building commented on how quickly she bonded with me. Her first professional grooming went very well and people cannot believe she is the same dog I originally brought home.  She is so adorable and sweet.  I just had her certified as an emotional support dog for my PTSD.  She loves traveling in the car and going everywhere with me. I have recommended WHS in Salem to several, even though I live in Portland, because you allow 30 days to see if the animal is a fit.  In our case, we needed all that time and thankfully she is a perfect fit. I recall Marie conducting the paper work and Marianne showing her to me in the observation room.  I definitely would like them to know how happy we both are.
Thank you,
Kaaren

And look at her now!

This picture was taken a month after her adoption, before professional grooming, but after hours of Kaaren’s brushing. 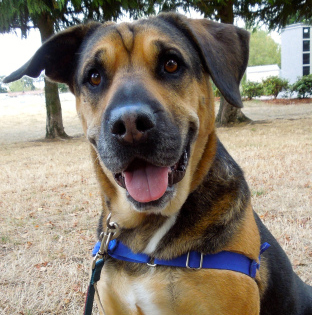