It’s been a BIG week for some terrific dog adoptions at Willamette Humane Society! Out of twelve dogs who are now in their new homes, nine of them were Blog Dogs. Here they all are: 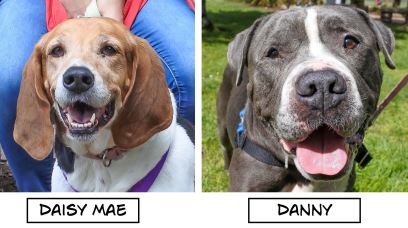 One of the happiest adoptions ever was Knuckles McGee (now named Buddy). He had waited for his perfect family fit since May 27th, and had been at another shelter before that. We were over the moon about this wonderful boy’s new life. And he wanted to announce it himself!

Quila was the lucky dog chosen to go swimming at Bailey’s Journey last Friday. And boy, did she have a great time! Quila is a three-year-old Staffordshire/Bull Terrier mix. She walks well on leash, knows basic commands, and is treat-motivated…unless there is a tennis ball nearby. This sweetheart LIVES for tennis balls. 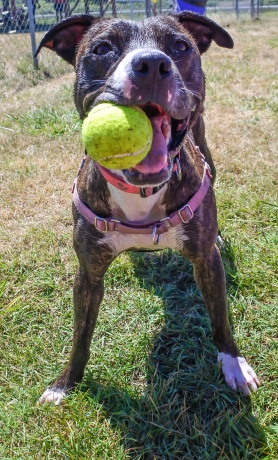 And on Friday she found out that she could not only run after them, but SWIM after them! Quila absolutely LOVED swimming and gave it her best in all three of her swims. By the time we left, she was one tired girl. Quila will need to meet any other dogs she would live with, as she can be picky about what dogs she likes. She is not a dog park kind of girl and she will need a tall fence just in case a tennis ball goes sailing over it. As you will see in her video, she no doubt would excel in dock-diving or agility. She is one quick learner and amazingly skillful athletically. She is fine with kids ten or older. Quila is hoping that once people see her in action, she’ll be found by her forever family. Here’s her movie.

While Quila almost always catches a tennis ball mid-air, once in a while this happens… 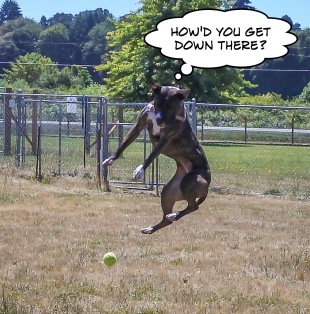 Caroline’s Pick of the Week!

Maggie, a Karelian Bear Dog mix, is fourteen years old. I met her in 2010, the first time she arrived at WHS. I liked her quiet, gentle ways immediately and wasn’t surprised when she was quickly adopted. I thought I’d never see her again. But a year later she was surrendered a second time because her family was moving. When she was still there at Christmas time, I took this picture of her for my blog post. She was the same sweet, cooperative girl I remembered. Again she was adopted.

Then last week, five years after I told her goodbye a second time, we met again at the shelter. Not surprisingly, Maggie now has a lot more gray hair, but then, so do I. Caroline and I spent time with her on Wednesday to get new pictures and I once again fell in love with this gentle soul. Maggie is now looking for a retirement home. She’s ready to relax with her peeps and doze after a stroll around the neighborhood. She’s not a fan of cats and at her age would like older children or just adults in the home. She is house-trained and crate-trained. I’m so hoping that Maggie’s fourth home will be her forever one. 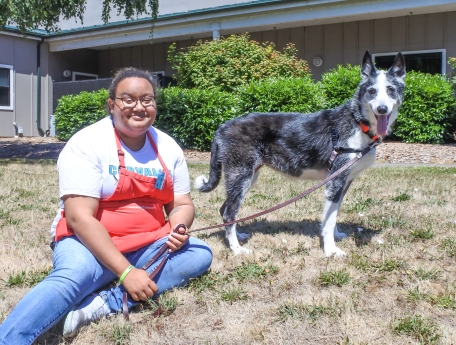 Francis is another one of Maggie’s fans and spent time with her on Sunday.

In the hope of helping some of our overlooked long-term dogs find their forever families, some of the shelter staff decided to pick a favorite to showcase. So on Sunday, our Shelter Manager Rachel asked me to take some pictures of her with Bellatrix, a two-year-old Boxer/Bull Dog mix, who has been waiting for her new home since June 2nd. 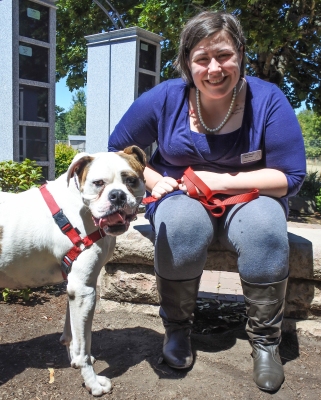 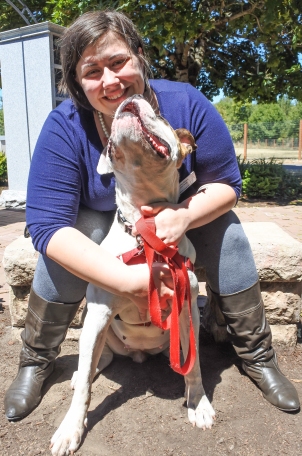 This is what Rachel has to say about her favorite shelter girl.

“What can be said about Bellatrix?! She’s super beautiful, with one of those unique faces that just catches your eyes. She’s so sweet and loves to be around people, and she loves treats. It’s tough because in the kennel, she’s super nervous, and I think her lack of enthusiasm in the kennel is what has gotten her easily overlooked for the past two months. She gets uncomfortable with all of the people coming by and staring at her inside this concrete box, but once you get her outside, HOLY MOLY does she ever SMILE! She has this happy-go-lucky face and attitude, and just wants a person or two to call her own. She is a nervous nellie in storms and fireworks, and can be selective with other dogs, mainly because she wants all the attention to herself, so for that reason we have asked that she not live in a home with other dogs or cats. She isn’t high maintenance, and wouldn’t be a great candidate for dog parks, but someone dedicated to walking her and exercising her in a backyard would be perfect! She wants to be someone’s best pal, their buddy, their companion! She’s a great dog for older kids, teenagers at best, who are sturdy, can understand her needs, and can give her what she needs. Deep down, we’ve got this precious, insecure gal, who just needs someone to tell her she is worth it for the rest of her life, give her loves, good food, and keep her happy. I promise, there will be some great cuddles in return.”

Earlier in the afternoon, Laslo had taken Bellatrix out to a yard and she had loved her time with him. Maybe THIS week will be Bellatrix’s lucky one! 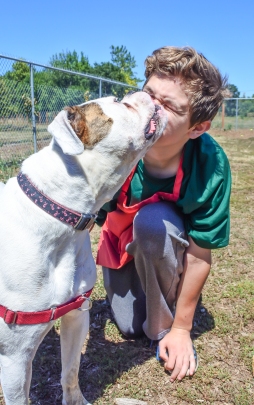 Marianne has been waiting and waiting for me to be available so Martha could write about me! Now I am!

If you are a regular reader of my posts, you are certain that Marianne has never met a dog she hasn’t loved. And you’d be right. However, Joshie is special. When he arrived, this big boy had a cold and needed some time to settle in before he was available to be adopted. During his recovery, Marianne spent a great deal of time with him and quickly decided he is the perfect dog. She couldn’t wait for me to meet him and take pictures, telling me that he often just fell asleep when she scratches his tummy. This I found to be true.

Joshie is an eight-year-old American Staffordshire Terrier mix who is about as laid-back as he can be. He has been an outdoor dog his whole life and is ready to spend his retirement years as an indoor/outdoor dog. He will need some help in house-training, so will need a patient peep to help him learn, but he promises to be a quick study. Joshie is a gentle old soul, happy to snooze by your side and will be content with a stroll around the block and then a belly rub while he drifts off to sleep. On Sunday Daniel and I joined Marianne out in a yard with this love bug. Did I mention he is treat-motivated?

I explained to him it was only a camera. 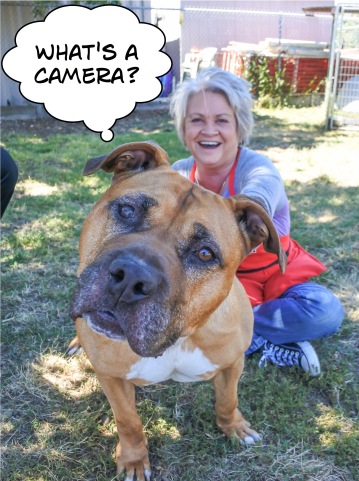 Well, how about Daniel? 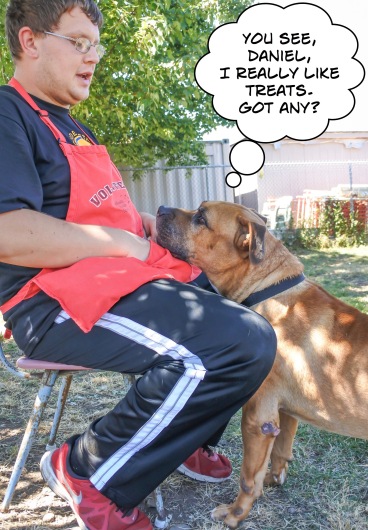 Today after all the dogs had been walked, Marianne, Caroline and I spent some quiet time with Joshie in the shade. 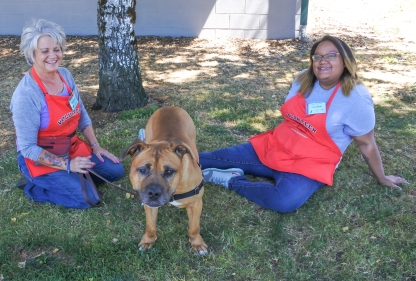 He continues to insist that he’s a lapdog despite the clear evidence that he is not.

We’re all hoping this sweet couch potato will get his forever home very soon.

Daniel’s Pick of the Week!

Meet Murphy, a happy-go-lucky full-of-energy two-year-old American Staffordshire Terrier mix. This is Murphy’s second time at WHS. We’ve learned he does not care for cats, so his forever home needs to be feline-free. He has been a rock star in playgroups, though being the rough-and-rowdy player that he is, he would need to meet any potential dog siblings to make sure their play styles match. Daniel loves Murphy’s energy, joyful enthusiasm for life and his sense of humor. Murphy would love our WHS training classes and is a very quick learner and already knows basic commands. Older kids would be best for this exuberant boy. 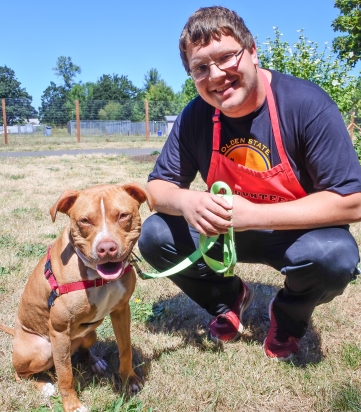 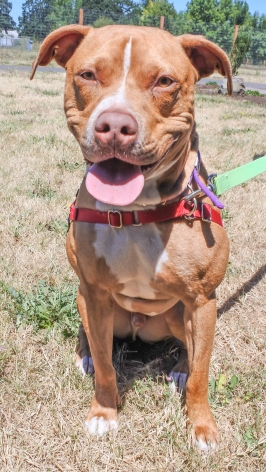 You can find out more about these dogs on the WHS website at https://www.whs4pets.org.

Here is Jolene with Jonny, who has been waiting for his perfect family fit since June 9th. He is a one-year-old Staffordshire Terrier mix. And he LOVES carrots! 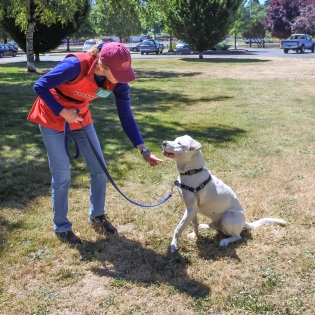 Here is Marianne with Ginger, a seven-year-old Australian Kelpie mix with GIGANTIC ears!

Here is Gibbs, a two-year-old Gordon Setter mix, with Jolene and Sandra. His adoption family was not the right fit, and so he is back at WHS waiting for his perfect match. Such a wonderful ball dog! 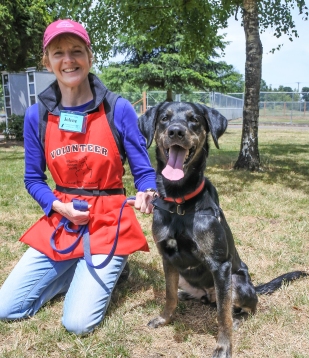 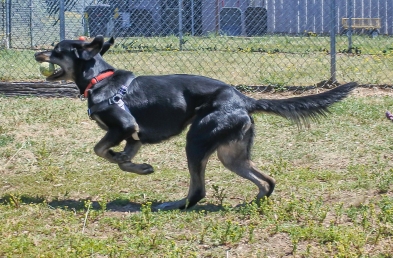 Here is Osa with Marianne and Caroline. Osa is a three-year-old Staffordshire/Bull Terrier mix who has been waiting for her new family since May 16th. Such a shelter favorite! 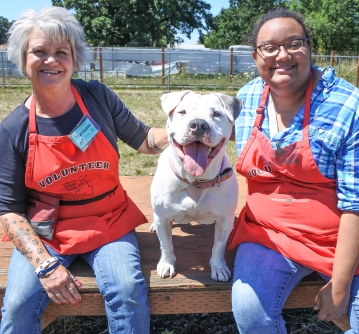 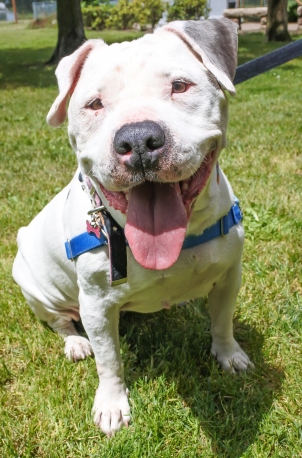 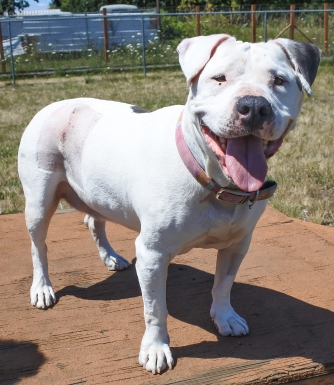 Today it was quite hot, but Osa still loved going around the track

Here is Roxy, a five-year-old Bull Terrier mix, with Caitlin. She is such a sweetheart and back at WHS after being adopted from us in 2013, but found recently as a stray.

Mr. Darcy arrived at WHS last November, a very nervous and worried boy. Here he was with Marianne at that time. Little did we know we didn’t need to be concerned about him. 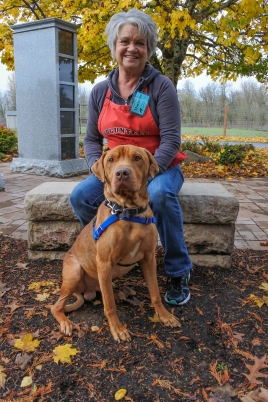 Here is the wonderful update I got last week!

“Mr. Darcy is healthy and happy. We had concerns due to kennel cough but it has passed. He is up to weight and very spunky! The couch, bed, and well anywhere a human would sit, has become his. He firmly believes he is a lap dog and is totally offended if told to get down. He is a sweet boy and I am so glad we found him. He has no bad habits; we are in love!” 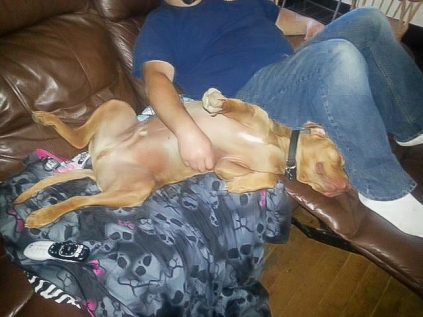