I’m thrilled to report that two more of our long-termers were adopted last week! Seniors Maggie, fourteen years old, and Joshie, eight years old, finally found their retirement homes! Of course, they were excited and wanted to announce their news themselves.

Here are all of the Blog Dogs who were adopted last week.

Brody was a fairly new shelter dog and was scheduled to attend an outreach event last week before his new person found him. Since Brody couldn’t go home right away, his new person came every afternoon to spend time with Brody until the day came that they could go home together. Here they were during one of the visits. Brody is a very lucky boy.

I’m back but it wasn’t because of anything I did wrong.

Our sweet girl, Rusty, came back to us last week after being adopted a month ago, and her person was very sad. His schedule changed and he had to be gone from the house for long periods. He didn’t feel it was fair to Rusty to be left alone so much and wanted her to get the attention she deserves. Rusty is a six-year-old American Staffordshire Terrier mix. She weighs forty-five pounds, so is a nice medium-sized gal. She is house-trained, has lived with older children (10 and above) and another dog. She can be a bit picky about her dog friends, so would need to meet any future fur sibling. Rusty LOVES people and playing fetch. She will race after the ball as long as you will throw it. She is treat-motivated and enjoys learning new skills. And this girl is ALWAYS smiling. Need a lift when you come home? Rusty’s happy dance and grin will brighten the dreariest day. It’s no surprise that Rusty is a favorite of so many folks at the shelter. We love her sense of humor.

I’m new and a little nervous being in the shelter. I hope I can go to a new home soon.

I met Daffy, a four-year-old Beagle mix, on Sunday for the first time when Caitlin brought her out for a walk and pictures. Daffy seemed overwhelmed and wanted more than anything to crawl into my lap while I tried to take her picture. She was surrendered due to a change in her person’s lifestyle. She is both house- and crate-trained. She loves to run, hike, and swim. She is too active for small kids, but would be fine with children eight and older. Her former person said that while she is very active, she also can be a couch potato and relax with her peeps. Caitlin spent some quality time with Daffy, assuring her that a new family would come soon and take her home.

I may not be a puppy anymore, but no dog will love you more.

Danny is a thirteen-year-old Poodle mix. Due to his age, he will need an adult retirement home. While he doesn’t hear or see as well as he once did, he still has a lot of love to give and some spunk, as well. When I went to take him for a walk the first time, he was so excited to go outside and the spring in his step showed he still has an interest and love of life. He will be very easy to have around, as he enjoys snuggling and sleeping after a short walk. On Sunday I saw that Francis had him out and it wasn’t long before Danny had Francis wrapped around his paw in a yard.

He liked the cheese bit that I offered him.

Off to hang out in a yard together.

When I looked over later, there they were, enjoying the sunshine together.

I’m back. I need just the right fit of a person. Is it you?

Bellatrix was returned because she was a bit too strong and energetic for the senior adopter. Bell is a two-year-old Boxer/Bull Dog mix who is looking for just the right person who can give her the exercise and attention she needs. In return, she will be a goofy, affectionate character who will keep them laughing. Bell is not a dog-park or off-leash kind of girl. She will need to be the only dog in a cat-free home. She is afraid of storms and loud noises and she needs patience to help her with house-training. Because she has some special needs, her adoption comes with a consultation with our Behavior and Training Coordinator, Chelsea. We’re hoping that the perfect match for Bellatrix will come soon. Here she is with her “staff,” Caitlin, Caroline, Linda, and Marianne.

Linda decided to see if she could play catch. She could.

Here she is relaxing.

I don’t understand why my person hasn’t come to adopt me yet!

Yamhill continues to wait for a new family. I have written about him several times and after spending time with him and Linda in the big yard on Sunday, I decided to feature him once again. Yamhill is a very active, smart eight-year-old Lab mix who was found as a stray and brought to WHS on June 26th. He will need a home without other dogs. He’ll never be a dog-park or off-leash boy. He’ll need to go home with older children, 13 and up. But what a great family dog Yamhill will be! This boy LOVES to play fetch, jump in the pool, and learn new games. He’s happy and energetic. To help keep Yamhill challenged and to improve and broaden his skills, he has been working with the Behavior Team at the shelter.

I watched as Linda, one of the Behavior Team members, worked on Yamhill’s impulse control. She stuck a tennis ball in the fence, then asked him to sit and wait until she gave him permission to get it. This is what happened when she said “GO!”

Waiting is hard, but he’s getting it.

And sometimes, it seems one waits forever!

But it’s worth it!

We weren’t sure what this game was.

And after the games, it’s nice to just sit and visit.

There must be a person out there wishing they had an active, eager boy as their only dog. We sure hope they come to the shelter soon and meet our boy.

Here are some other shelter dogs waiting for their forever homes…

Roxy is a five-year-old Bull Terrier mix, here with Caitlin.

Spencer, a seven-year-old Dachshund, is here with Jessica and Gracie.

There are two wonderful updates this week.

First, as you know, Murphy was adopted last week, and did he ever get his dream of a forever home! Here’s what his peeps wrote:

“These are just a few of the pictures and a video we’ve taken in the week since we adopted Murphy 😊 He’s such a good boy! He’s very smart, and has picked up new tricks quickly such as ‘off’ (he’s allowed to sleep in our room, but not on the bed!), ‘stay,’ and ‘wait.’ He loves treats and pillows! We’ve gone to the dog park once, and he met a new friend who he’ll be able to have follow-up play dates with! It turns out, my friend’s dog likes to play a little rowdy and fetch, too! Murphy has a big personality and loves cuddling with dad! We plan on trying hiking in the future, and are thinking about trying out agility classes. We were thinking it would help him exercise and keep his mind active, too! We’ll send more updates🙂 Thank you so much for helping us find our first fur-baby!! 🐶😍”

And here is a happy video:

Arlo was adopted in April of 2011. He was a delightful character at the shelter and quickly became one of my favorites. He LOVED to play ball. Here he was while still at WHS.

Since his adoption, his peeps, Carol and Paul have kept in touch with me and I get to go visit Arlo (and Carol and Paul) every so often. Yesterday I drove out and had a great afternoon talking and playing.

Arlo is so proud of his collection of various sized balls.

But his favorite is this old dented one. Go figure.

We had a great time just hanging out.

Arlo could not have found more devoted parents. He is so loved.

On those happy updates, that’s it for this week! 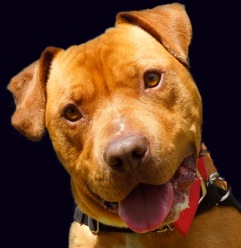 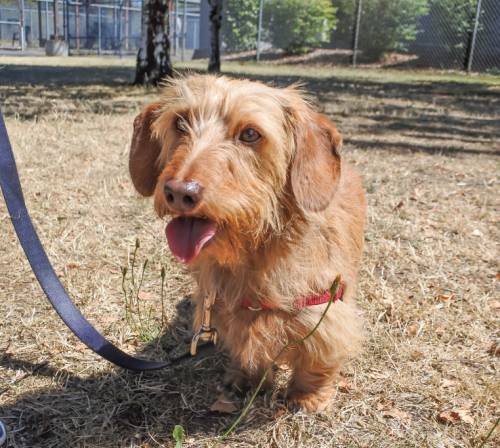